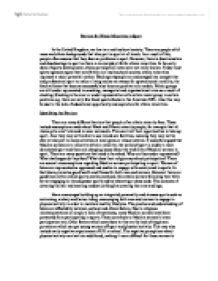 Barriers for Ethnic Minorities in Sport In the United Kingdom, we live in a multicultural society. There are people of all races and ethnic backgrounds that take part in sport at all levels. As a result of this, people often assume that they face no problems in sport. However, there is discrimination and disadvantage in sport as there is in everyday life for ethnic minorities. In the early days of sports development, ethnic participation rates were not really known. Today most sports agencies agree that now Britain is a multicultural society, ethnic minorities represent a major potential market. Black sportspeople are encouraged into competitive and professional sport to make a living and as an avenue for upward social mobility, the black athletes that become successful also become positive role models. Ethnic groups are still under represented in coaching, managerial and organisational roles as a result of stacking. Stacking is the over or under representation of a certain racial group in certain positions e.g. there are very few black quarterbacks in the American NFL. Also this may be due to the lack of educational opportunity and aspiration for ethnic minorities. ...read more.

This may also include early negative experiences of P.E. at school. The negative perceptions about physical activity can last into adulthood, making it more difficult for these women to engage in sport. Therefore, cultural and environmental barriers seem to be the determining factor in young Muslim women's attitudes towards participation in sport. One major factor affecting participation in sport for ethnic minorities is r****m. This stems from prejudice linked with the power of one racial group over another. This leads to discrimination, or unfairness. Although illegal, discrimination still exists on the grounds of colour, language and cultural differences. The Professional Football Association (PFA) set up a campaign in 1993 with the Commission for Racial Equality to 'Kick r****m out of Football'. This now operates independently and is called 'Kick it out'. The sports council and National Governing Bodies encourage non-discriminatory attitudes to fight r****m. Personal r****m is seen when black and ethnic minority people are made to feel unwelcome by individuals at a sports club. This obviously puts people of joining clubs and ads to the lower participation rates. Socioeconomic barriers are also lowering participation rates amongst ethnic minorities. ...read more.

The symbol of the campaign is the black & white interlocking wristband, as worn first in public by Thierry Henry at the World Player of the Year gala in Zurich in December 2004. The wristband was created as a symbol of camaraderie with the players and fans who share a determination to take positive action against r****m in football. The campaign had support from Nike's sponsored players, including Thierry Henry, Rio Ferdinand, Ronaldhino, Ruud Van Nistelrooy, Claude Makalele, Philip Mexes, Carlos Puyol, Roberto Carlos, Christoph Metzelder, Otto Addo, Adriano and Fabio Cannavaro. Nike launched high profile TV advertising to support the campaign. Additionally, some National teams who wear Nike kit wore specially designed shirts during the campaign. Also another campaign aiming to kick r****m out of football is the Kick it Out) campaign. Kick It Out works throughout the football, educational and community sectors to challenge r****m and work for positive change. The campaign is supported and funded by the game's governing bodies, including founding body the Professional Footballers Association (PFA), the FA Premier League, the Football Foundation and The Football Association. With campaigns like these being promoted by the sports biggest role models like Thierry Henry, this has an extremely positive effect. The children and adults playing the sport believe if Ronaldhino and Rio Ferdinand are opposed to r****m, then so should I. ...read more.