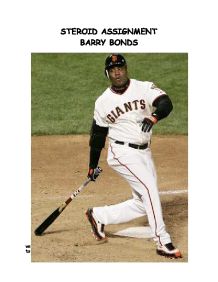 STEROID ASSIGNMENT BARRY BONDS On a warm, sunny morning on July 24 in the year of 1964, Barry Lamar Bonds was born in Riverside, California. He was born the son of Patricia and Barry Bonds, a former major league All-Star. As he grew up, he attended Jun�pero Serra High School, in which he excelled in baseball, basketball, and football. During his high school years, Barry was part of the varsity baseball team and was drafted by the San Francisco Giants when he was a senior. Barry Bonds had declined the Giants' offer and attended Arizona State University instead, where he continued to excel when playing baseball. After graduating and receiving a degree in criminology in 1986, Bonds was drafted by the Pittsburgh Pirates and began his major league career in the MLB. Barry Bonds made his major league debut on May 30, 1986 with the Pittsburgh Pirates. In his first season he had 16 home runs, 48 RBI, 36 stolen bases and 65 walks, while playing centre and left field and he batted as the leadoff hitter. In his second season, Bonds obtained 25 home runs, 32 stolen bases, and 59 RBIs. Barry Bonds continued to expand and get better each season. In 1987 and 1989, Bonds recorded 19 home runs, 58 RBIs, and 14 outfield assists, and was second in the MLB. ...read more.

Glove Awards throughout his career > Obtained 12 Silver Sluggers as an outfielder > Part of numerous clubs such as the 50/50 club, the 500 club, and the 600 club > 3-time MLB Player of the Year > 14-time All-Star > He recorded 762 home runs, 2,558 walks, 688 intentional walks, 1,996 RBI, .444 on-base percentage, 2,227 runs, 2,986 games, 1,440 extra-base hits, 12.92 at-bats per home run, 5,976 bases, 601 doubles, .607 slugging percentage, 514 stolen bases, 9,847 at-bats, 2,935 hits, 77 triples, 91 sacrifice flies, and 1,539 strikeouts > And much more... Effect of Steroids on Barry Bonds' Career: Barry Bonds was always an amazing athlete, even before he allegedly began taking steroids. He was going to be drafted into the National League at the mere age of 18 (an offer which he politely declined). He had already won 3 MVP awards and passed the 300 home runs mark, before being said to take performance-enhancing drugs around 1998. After the year Barry Bonds was said to have taken steroids, his career was beginning to reach an all-time high, which was rumoured to be the effect of steroids on Bonds' body. There were tests done that conclude that Barry may have used a steroid-like substance, leading to his rebuttal, in which he attempted to place the blame on his trainer for "tricking" him into using steroids. ...read more.

* Increased risk of tendon injuries * Increased risk of nose bleeds * Insomnia * Decrease in immune system effectiveness * Infertility Men: * Increased risk of prostate enlargement and cancer * Decreased testicular size * Gynecomastia (growth of b*****s) Women: * Increased risk of cervical and endometrial cancer * Increased risk of osteoporosis * Irreversible enlargement of the c******s * Irreversible hoarsening and deepening of the voice * Irreversible increase in facial and body hair * Decreased breast size * Amenorrhea * Uterine atrophy Children: * Short Stature * Premature ephiphyseal closure Taken from: http://www.musclenet.com/steroid.htm A Natural and Legal Way for Athletes to Improve Their Performance: Improving an athlete's performance isn't as complex as it's believed to be. Athletes just have to follow simple lifestyle rules every day to help boost their athletic performance naturally and legally. An athlete just needs to follow the workout routine specific for what sport they are participating and while they exercise they must rehydrate, replenish their body with carbohydrates and protein, refuel electrolytes, and practice a lot. Athletes can also do specific exercises to work on things like their swing, speed, kick, etc. For example, if a baseball player wanted to work on the power of their swing, they would use a heavy, lead bat and practice batting with that, gradually increasing their strength. This may be the "long road" to improving athletic performance, but it's also the natural and legal way. ...read more.