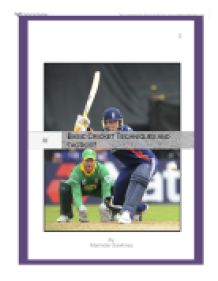 Basic Techniques and Tactics in Cricket.

[] By Maninder Sawhney Cricket Cricket is a combat sport as it involves striking and throwing a ball with the motive of the teams to score as many runs and bowl the oppositions out. The techniques that are used in cricket are batting, bowling, fielding, throwing and catching. Batting The technique for batting in cricket is to have a balanced stance, where legs are shoulder width apart and the bat is lifted straight at the hips. The bat should also be held with a 'v' grip. This is how a batsman would prepare themselves before performing the skill. To execute a basic cricket shot, from the preparation phase the batsman must, watch the bowlers hand and move his back foot back and across and then move his front foot so that he is inline of the ball and then he should swing the bat through from the hips , so that the ball hits the middle of the bat. The bat should follow through as you strike the ball and your feet should move into a comfortable position as you keep balance (commonly few steps forward or backwards) Bowling The technique for bowling is to grip the ball with the first two fingers and the thumb. Holding the ball like this, you must run front on toward s the wicket from a comfortable length towards the bowling crease where you will turn sideways and rotate your body moving the blowing arm from a sideways on position to over your head, through a coil position. The ball is released above the head and the other hand follows through the flow of this movement and the bowler will move forward a slowly come to halt. (Differs depending on type of bowler) Fielding The basic technique in fielding is being able to walk in, dive, and perform the barriers. Walking is involves watching the ball as the batsman performs the shot and walking in too steps as the bowler bowls so that you're on the b***s of your feet and ready to move in any direction, in order to field the ball. ...read more.

In both the techniques it is important for the player to step into the throw as the pick the ball up as it ensures that they are stable, and in a good position to throw. Also it creates better power and accuracy. Getting into a correct position is important as it prevents any muscle strains as the momentum of moving from a sideways on position to stepping into the throwing position will generate the power, that some players try to generate using just their arms which can cause injuries. Catching is vital, and using the correct technique to catch is one of the most important aspects of the game, as not only does it give the players opportunities to get each other out, but it also makes the process safe. Using either the English or Australian technique means that the player is in a safe position to catch the ball and has less risk of hurting their fingers as catching, as it can be common to break fingers. Also this these techniques allow more security when catching as you cage the ball into your body, which means that you keep hold of the ball taking its pace off, which guarantees that you keep hold of it. Performing these fielding skills means that the athletes are doing the skills safely and also are in better positions as performing the skills which means that they can apply pressure and meet objectives and cut runs out in the field. Tactics There are many different tactics that are used in cricket. The tactics that are used are used to enhance the performance of the primary skills and help meet goals and objectives. The common tactics that are used are different types of bowling deliveries, field settings, power plays, aggressive/ defensive batting, types of bats and batting and bowling partnerships. Deliveries Different types of deliveries are used by bowlers as a method to keep batsman at the crease unsettled and to prevent them from making runs and increasing the chances of them making some sort of mistake which can lead to them taking a wicket. ...read more.

Batting attitude Batsman should change their attitude for defensive to aggressive depending on the situation, and how they feel at the crease. Being aggressive should mean that the batsman plays attacking shots, which take on the bowler's deliveries. Moving down the track is affective as the batsman is getting close to the ball and creating space, and the correct angles so that he can achieve the maximal runs. This tactic is performed like this as it unsettles the bowler and helps the batsman achieve aims of scoring quick runs alongside putting pressure on the bowler and fielders. Defensive batting, should involve playing shots along the floor, and with soft hands. This will irritate and frustrate the bowler, as he won't be able to get the bats man out and will feel the batsman is dominating as he is not troubled by the bowling. This will be useful in partnerships where one person is scoring and the other is just there supporting them. Performing these tactics can be beneficial as it helps team win games as they can change the game situation, and apply pressure on the opposition, and relive pressure of themselves, making the targets and objectives easy to obtain. Types of bats Different types of bats are used by batsman in different situations, so that they can adapt and get the most out the situation they are bating in. Also using different bats means that the batsman will have an advantage, depending on what they would like to do. For example using a heavier bat, helps score the big shots. Bowling and batting partnerships Bowling partnerships is a tactic that is used, as some bowlers who have contrasting qualities who bowl together as a pair, can create a lot of pressure for batsman as they can keep the run rate down and trouble the batsman as they are making the batsman work extra harder to make their runs. The benefits of using this is that it leads to batsman to lose concentration through tedium, as it can get tough and makes them prone to play false shots. ?? ?? ?? ?? ...read more.