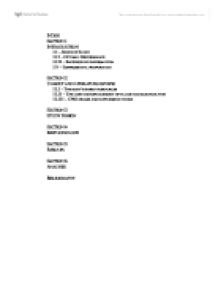 INDEX SECTION 1 INTRODUCTION 1.1 - BASICS OF RUGBY 1.11 - OPTIMAL PERFORMANCE 1.111 - BACKGROUND INFORMATION 1.V - EXPERIMENTAL PROPOSITION SECTION 2 THEORY AND LITERATURE REVIEW 11.1 - THE BODY'S ENERGY RESOURCES 11.11 - THE LOSS AND REPLACEMENT OF FLUIDS AND ELECTROLYTES 11.111 - CHO DRINKS AND SUPPLEMENTATIONS SECTION 3 STUDY DESIGN SECTION 4 METHODOLOGY SECTION 5 RESULTS SECTION 6 ANALYSIS BIBLIOGRAPHY SECTION I INTRODUCTION 1.1 - BASICS OF RUGBY Rugby Football is a general name for a variety of football. It was said to have originated when a boy at Rugby School in Rugby, England, picked up and carried the ball during a game of football in 1823. Previously, the rules had only allowed the ball to be kicked. The modern game of rugby dates from the 1860s, when it was adopted and modified by other English schools and universities. In 1871 the English Rugby Union was formed to standardize the rules. The game is played with an oval ball, blunter in shape than the American football so that it may easily be bounced and dropkicked - that is, kicked on the rebound. The form of rugby officially designated as Rugby Union Football played in more than 100 countries, including Australia, New Zealand, Japan, England, France, Italy, Fiji, and South Africa. The sport's international governing body is the International Rugby Football Board (IRFB), located in Dublin, Ireland. In the United States there are more than 1400 rugby clubs and more than 100,000 players, governed by USA Rugby, located in Colorado Springs, Colorado. Rugby was only played as an amateur sport until 1995, when the IRFB passed a resolution allowing national governing bodies and local rugby clubs to pay their players. A rugby team consists of 15 players, generally divided into 8 forwards and 7 backs. Seven substitutions of players are permitted during a match in addition to injury replacements. Injured players, once having left the game, may not return. ...read more.

Energy is then used from other sources to turn the ADP back into ATP, and therefore this particular energy cycle can only continue as long as there is energy to ADP back into ATP. The energy used to turn ADP back into its original form of ATP comes from another molecule called Creatine phosphate which similar to that of ATP is broken down to produce energy, and similar again in the sense that there is only a limited amount present in the muscle cells. Ultimately via the use of Creatine phosphate there is enough potential for the ATP breakdown to create approximately 10-15 seconds energy. This amount of energy is evidently not enough for those sportspeople who participate in events longer than say the 100m. When the energy created from the ATP CP system is exhausted the demand calls for the use of another energy system, called Anaerobic Glycolysis. This system is involved with the breakdown of glycogen or glucose without oxygen hence the term 'anaerobic'. Essentially, glycogen that is stored in the muscles and liver, and glucose that is stored in the blood are broken down in a complex process involving 12 enzymatic reactions creating energy and a by-product called Pyruvic acid. Pyruvic acid on its own is not harmful, however without oxygen it is turned into another acid called lactic acid, and this is harmful creating cramps around the body via OBLA (of onset of blob lactate accumulation where the lactate accumulates in the blood). This accumulation also slows the energy production, but there is ultimately enough energy to complete a 400m race for trained individuals. The final way of obtaining energy is one that does involve oxygen and to that end it is called the aerobic system. The system, just like the anaerobic system uses the breakdown of glycogen or glucose to produce energy. In fact the only difference between the two systems is that oxygen is used in the latter to Pyruvic acid produced by Glycolysis and in turn into more energy instead of lactic acid. ...read more.

Medicine and science in sports and exercise, 21, 59-65. Although on the whole research with regards to the use of isotonic drinks is positive, in the sense that most believe that isotonic drinks do prolong performance and replace lost electrolytes, there is also research to the contrary. Although blood glucose levels are altered by their supplementation, neither carbohydrate nor caffeine improved performance in a 30minute cycling time trial. Rehre, N. J., et al. (1997). Medicine and science in sports and exercise, 29, 1434. Performance differences under fuel-additive conditions are largely due to a placebo rather than a real effect. This could explain why investigations measuring CHO-loading effects often produce insignificant results. Clark, V. R., et al. (1998). Medicine and science in sports and exercise, 30, 346. A feeding of CHO very close to the commencement of an endurance exercise bout does not affect the endurance performance of untrained adolescent boys. It would be interesting to see what happens with trained boys. Hendelman, D. L., et al. (1997). Medicine and science in sports and exercise, 29, 724. Hendelman et al (extract above) investigated the effects of pre-exercise carbohydrate feeding on responses to endurance exercise and performance in untrained high school boys and found no effect. He says that it would be interesting to see if that is the case in trained boys, and is indeed the focus of this research. Where the focus of his research was on pre-exercise ingestion of carbohydrate, this particular project will focus on ingestion during and after the activity also, in attempts to discover if Carbohydrate supplementation in the form of isotonic drinks does have an effect on optimal performance. When ingesting CHO prior to an event, the form of the CHO does not matter as long as there is adequate time for solid food to be assimilated, however, when time is short, the fastest is liquid compared to the slowest which is solid. A conservative approach would be to always prefer the liquid form of CHO since it also offers some fluid replacement. Doyle, J. A., et al. (1997). Medicine and science in sports and exercise, 29, 718. ...read more.