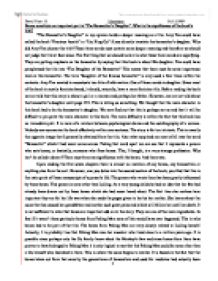 Bones constitute on important part in &quot;The Bonesetter's Daughter&quot;. What is the significance of the book's title?

Pavel Year 11 Literature 16.11.2004 Bones constitute on important part in "The Bonesetter's Daughter". What is the significance of the book's title? "The Bonesetter's Daughter" in my opinion holds a deeper meaning as a title. Amy Tan could have called the book "Precious Auntie" or "Liu Xing Gu" if you directly translate the bonesetter's daughter. Why did Amy Tan choose this title? These three words must contain some deeper meaning and therefore we should not judge the title at face value. The first thing that we should look at is what these three words are signifying. They are putting emphasis on the bonesetter by saying that this book is about His daughter. Tan could have paraphrased the title into "The Daughter of the Bonesetter" This means that there must be some importance laid on this bonesetter. The term "daughter of the famous bonesetter" is only used a few times within the contents. Amy Tan wanted to accentuate two bits of information. One of those words is daughter. Since most of the book is mostly feminine based, it should, naturally, have a more feminine title. ...read more.

These events link the past with the present. If we delve more deeply into these small examples of how this curse still persists. Bones may take thousands of years to decompose. This may have some connection with this curse. Since we have established that it is based on the bones from Peking Man which had survived for so many life times, is there significance in the fact that the curse in itself may also last this long? Like those bones, it may be passed on from generation to generation for hundreds of thousands of years. There is also a small link between the title and Peking Man. It is ironic in a way how the family of bonesetters is having trouble with this person's bones. The can heal other people's bones but they somehow cannot set Peking Man's bones right. They have actually lost them. This is why this curse haunts the famous bonesetter family. They had lived off these bones for generations making their living by convincing other people that they possessed special healing powers. And now, they are being killed off, one by one, because of these same bones. ...read more.

One last point that I would like to point out is the importance of oracle bones not just to Precious Auntie and LuLing but also to the rest of China. In their culture, oracle bones were used as a way to speak to the gods and ask them questions whose answers could be read from the cracks which appeared on the rocks. Bones are a very important part of the Chinese culture and are used for a holy purpose. Naturally, this again links to the curse that this family is haunted by. If bones really hold that much power over people by being able to communicate with the gods, then if they are misused and disturbed like the way the Gu family did, they can therefore be able to curse them. The curse has grown in importance for LuLing ever since she has realized why it has followed them and what kind of disasters it may lead to. Precious Auntie is the key link between the bonesetter and LuLing and Ruth. She is also the one who suffered most from this curse. This is why she is such an important character. This is why she forms the title of this book. 1 ...read more.