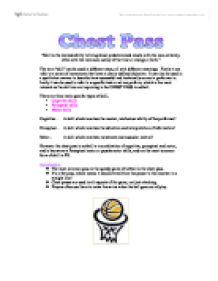 Chest pass - &quot;Skill is the learned ability to bring about predetermined results with the max certainty, often with the minimum outlay of the time or energy or both.&quot;

"Skill is the learned ability to bring about predetermined results with the max certainty, often with the minimum outlay of the time or energy or both." The term "skill" can be used in different ways, all with different meanings. Firstly it can refer to a series of movements that have a clearly defined objective. It can also be used in a qualitative manner to describe how successful and technically correct a performer is. Lastly it can be used to refer to a specific task or act we perform, which is the most relevant as the skill we are improving is the CHEST PASS in netball. There are three main specific types of skill; * Cognitive skills * Perceptual skills * Motor skills Cognitive - A skill which involves the mental, intellectual ability of the performer! Perceptual - A skill which involves the detection and interpretation of information! Motor - A skill which involves movement and muscular control! However the chest pass in netball is a combination of cognitive, perceptual and motor, and is known as a Perceptual motor or psychomotor skills, and are the most common form of skill in PE. ...read more.

2) Dynamic stretching exercises. 3) Movement and ball skills gradually approaching match intensity. Warm up; > Players should gently jog around the court, then on whistle perform an activity called out by the coach, these should include Side steps Touch sideline High knees Jog backwards Jumps > Players should gather around the coach, and gently stretch. Starting from the bottom working up to the top, players can look to coach for guidance! > Lastly players should get into a large circle, or if too many players, a few circles, and pass the ball about the circle. Practise 1) Simple passing; Requirements: - 2 players (three when increasing difficulty) - 1 ball o All players get into twos, each pair with a ball. o Standing 5m apart practise chest passing, with help from the coaching tips. o After every successful 15 passes in a row, both the players should take a step back, this increases the distance over which play has to be passes, hence the players need to use more power, while keeping accuracy. o To make the practise, add a defender, this way the players passing have to move around, while still using a chest pass! ...read more.

o Players split into two teams of three. o One team wear bibs. o Within a third of the court teams must pass the ball among themselves, only using chest passes, a goal is scored after 10 successful chest passes in a row! o All netball rules apply, such as contact, footwork, obstruction ect. Practise 5) Conditions game Requirements; - One ball - Two full teams of 7, - Full court, including posts. Main Objective: Emphasis on chest passing in a game situation! * Play netball in the usual way, with conditions, which will make the players think, and use the chest pass, which they have practised in earlier drills! * The conditions could involve; - Every other pass has to be a chest pass! - Before a goal can be scored, a series of 5 chest passes must be made! - Or finally by not allowing shoulder passes, this should increase the number of times players use The chest pass1 Cool down - The session should end with a cool down, which is a time which allows the body temperature to return to normal, it also helps to remove waste products, speeds recover. A cool down should include: - Gentle jog around netball court - Players should complete passive stretches! ...read more.