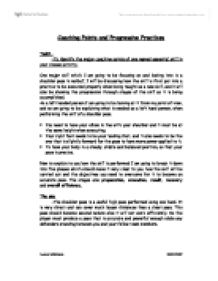 Coaching Points and Progressive Practices Task1. -To identify the major coaching points of one named essential skill in your chosen activity. One major skill which I am going to be focusing on and looking into is a shoulder pass in netball. I will be discussing how the skill is first put into a practice to be executed properly when being taught as a new skill, and I will also be showing the progression through stages of the skill as it is being accomplished. As a left handed person I am going to be looking at it from my point of view, and so am going to be explaining what is needed as a left hand person, when performing the skill of a shoulder pass. * You need to have your elbow in line with your shoulder and it must be at the same height when executing. * Your right foot needs to be your landing foot, and it also needs to be the one that is slightly forward for the pass to have more power applied to it. * To have your body in a steady, stable and balanced position, so that your pass is precise. Now to explain to you how the skill is performed I am going to break it down into five phases which should make ...read more.

Bending the knees slightly gives maximum control over your weight distribution, and provides the opportunity to spring out of position once the pass has been made. Here is an example of what you should look like in preparation for passing: Execution. Execution of a shoulder pass is what you do to make the pass successful. For full power behind the pass you need to fully straighten your arm all the way down to your fingertips. Keep your eyes on the player your passing to at all times, you should aim to point your fingers in the same direction as your pass. Whilst the ball has been passed you should transfer your weight to your front foot, producing more power into the pass. You should pass the ball as vertical as possible as the need to find the quickest route between you and the receiver which is a straight line. As soon as the ball has been passed the prepare to make your move into another space to receiver another pass by making your self available. This picture is an example of your arm being fully outstretched after passing the ball. Result. The result will be a successfully received pass, which isn't intercepted by the opposite team. ...read more.

Player A player B To build on passing standing still, the next step up is to pass on the run. However you have to consider other things like footwork. This drill is call ed line passing, in which u have 2 cues off people cue A and cue B and a feeder in the middle. This is the direction of running for the first pass, the feeder (yellow) then pass to player A when she gets into the middle. Player A receives the ball at the green stage, this is where footwork is needed( for beginners you can stop at green then receive the pass, however we are progressing). After receiving the pass player A then passes the ball to player B, with a shoulder pass, once received by player B, she then passes to the feeder and she then repeats what player A just did. And finally to take this to the next step would be to do line passing with a defender. You do exactly the same as the normal line pass however, you have to do a shoulder pass with a defender in the way, then dodge around the defender to then receive the ball. To then this. Green then being the new position, and pink being the defender. This will improve your footwork, dodging and what we want the most passing. ?? ?? ?? ?? Lauren Middleton 08/05/2007 ...read more.