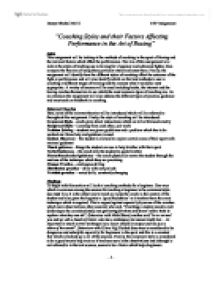 &quot;Coaching Styles and their Factors Affecting Performance in the Art of Boxing&quot;.

"Coaching Styles and their Factors Affecting Performance in the Art of Boxing" Intro This assignment will be looking at the methods of coaching in the sport of Boxing and the relevant factors which affect the performance. The aim of this assignment is to look at the styles of teaching use in boxing for a beginner and advanced fighter, then compare the theories of using these particular styles and a***s them. Finally, the assignment will identify how the different styles of coaching affect the outcome of the fight or performance and will also identify which are the best methods to use in coaching at different stages of training and the reasons why it would be most appropriate. A variety of sources will be used including books, the internet and the boxing coaches themselves to see which the most common types of coaching are. As an extension the assignment will also address the different types of practice, guidance and may touch on feedback in coaching. Relevant Theories Here, some of the relevant theories will be introduced which will be referred to throughout this assignment. Firstly, the style of coaching will be introduced: Command Style - coach gives direct instructions which are to be followed exactly Reciprocal Style - Learning from each other, pair work Problem Solving - students are given guidelines and a problem which has to be worked out. ...read more.

The research has also shown that all the different types of guidance are use but some are used more than others. Verbal and manual guidance are the two most common types used in developing a beginner and visual guidance is sometimes used. But some of the interviewed coaches say that visual guidance is needed so that the student can see exactly what they have to do. Now the assignment will address the coaching styles and their affects on performance at an advanced level. The gyms that were observed had a few advanced students and the coaching was the same throughout. What was observed seemed very poor as the students who were advanced were just left to basically do what they wanted. All of the coaches came up with a similar answer that they were exploring boxing for themselves but they received little or no input so it was not really guided discovery. The fighters which had the most talent got a lot of attention at whatever level they were at and the coaches seemed to concentrate their efforts on them. No evidence of other coaching styles was found at the advanced level, but in the research an article was found which highlighted some of the attributes a coach will need to take his students from beginner to advanced level (See web 2). ...read more.

Finally the guidance used should include all three styles as a beginner needs as much guidance as possible. Finally, the conclusions for the factors affecting performance at the advanced level. The assignment has found that the coaching styles for advanced students seems to be very relaxed and don't really make the fighter any better unless they are very talented. Although there was not much information on coaching at the advanced level, it can be concluded that more guidance is needed, so guided discovery would be used. Also the other main coaching style which should be employed at the advanced level is the problem solving, and students at this level should not neglect the basics and train the command style also to keep their basics up to scratch. Guidance should again be used as much as possible like in the beginner level because even an advanced student has a lot to learn and they must be constantly fed information to keep their technique developing which is a never ending process. So, the things which have been highlighted in conclusion are the best methods and combinations of coaching methods to achieved the best results in performance which have been found by assessing a variety of sources. Webliography: www.ringside.com/articles/goodcoach.htm (web 2) www.ringside.com/articles/roadwork.htm www.ringside.com/boxingmanual.htm (web 1) www.raylinnett.dial.pipex.com/20%pages/TheGym/coaching.htm www.brianmac.demon.co.uk/coaching.htm www.brianmac.demon.co.uk/styles. ...read more.