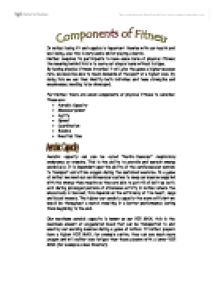 Components of Fitness for Netball.

In netball being fit and capable is important likewise with our health and well being, also this is very useful whilst playing a match. Netball requires its participants to have some form of physical fitness; the meaning behind this is to carry out simple tasks without fatigue. By having physical fitness in netball it will give the game a higher success rate, we would be able to reach demands of the sport at a higher level. By doing this we can then identify both individual and team strengths and weaknesses, needing to be developed. For Netball there are seven components of physical fitness to consider. These are: * Aerobic Capacity * Muscular power * Agility * Speed * Coordination * Balance * Reaction time Aerobic capacity can also be called "Cardio-Vascular" respiratory endurance or stamina. This is the ability to provide and sustain energy aerobically. It is dependant upon the ability of the cardiovascular system to transport and utilise oxygen during the sustained exercise. In a game of netball we need our cardiovascular system to keep our muscles supplied with the energy they require so they are able to get rid of built up lactic acid during prolonged periods of strenuous activity in netball where the whole body is involved, this depends on the efficiency of the heart, lungs and blood vessels. The higher our aerobic capacity the more efficient we would be throughout a match resulting in a better performance lasting from beginning to the end. Our maximum aerobic capacity is known as our V02 MAX; this is the maximum amount of oxygenated blood that can be transported to and used by our working muscles during a game of netball. If netball players have a higher VO2 MAX, for example centre, they can use much more oxygen and will suffer less fatigue than those players with a lower VO2 MAX (for example a Goal Shooter). ...read more.

outside of the circle), the shooter sprints from the post to a cone keeping her eyes fixed on the feeder she pivots at the cone and runs back towards the post still keeping her eyes on the feeder. Repeat 5 times incorporating all five cones. To make it more worthwhile, place a feeder to pass the ball into the shooter on her way towards the post, when the shooter receives the ball she must apply the footwork rule, balance in her position and shoot. To vary this practice further, try passing the ball at different time in the shooters run giving her coverage of the whole circle allowing near and far shots. Name: Pauline Harrison Address: Netball House 9 Paynes Park Hitchin Herts SG5 1EH Telephone: (01462) 442344 Fax: (01462) 442343 Website: www.englandnetball.co.uk The All England Netball Association | Annual General Meeting | Management Committee | Committees For | | | | | | | Coaching Umpiring Participation Performance Regional Chairmen Schools Regions (10) | Counties (57) | Leagues (375) | Junior Leagues (35) | Clubs (3,305) | College/Youth Clubs (85) | Schools (2848) | Registered Participants (55,585) The above tree diagram shows the structure of netball in England. The county selectors go to each county and pick the best talents and move them to play at county level. If they are good enough they have the chance to represent England at an international level, where they are given specialised coaching and more chances to excel in netball. To promote netball to children of a young age there are two schemes, "First step Netball" and "High Five". Which are simpler versions of the game. "First Step Netball" is aimed at children between the ages of 7 and 9. In this game there is only 4 players as opposed to 7 and the court size is reduced to one third of an actual netball court. ...read more.

I set myself targets to improve my performance. By the time I had my first match I didn't really feel like I had improved in my game after only a week, I felt by analysing the mistakes I made in match 1, I could improve by match 2 as I had the figures to work with, if I could reduce these after another week of training then I was improving and I could continue with the same type of practices. By match 2 my performance had slightly improved, this was pleasing as I put in a lot of effort and organised more team practices to help myself with the targets, but at this point in my own head I set myself a "mini-target" I wanted to reduce my errors of each weakness by 3 from the previous figure in the next week. I failed to do this which prompted me to practice harder although the pace changing and defending was achieved I still needed to work on balance and tactical plays. At the end of my month I felt I had improved in my knowledge of the game due to reading around the sport and working extremely hard on the specific targets I set myself. I feel I have a lot more confidence when playing now, my defending and balance are the biggest improvements and I will continue to practice these to ensure I always mark the opposition and receive a pass without falling over and disobeying the footwork rule. Also by introducing tactics into our club team situation we have had a greater average of wins compared with when we never used a strategy. Overall I am pleased with my progress the extrinsic feedback has been as good as my kinaesthetic feeling, players from other teams have commented as well as those I play with, hence being nominated for the two awards. * www.englandnetball.co.uk * Fellow netball player helping me to identify strengths and weaknesses * Sport and P.E (second edition) - Hodder and Stoughton ...read more.