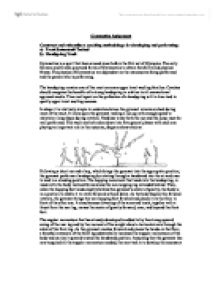 Construct and rationalise a coaching methodology for developing and performing: a) Front Somersault Tucked b) Handspring Vault

Gymnastics Assignment Construct and rationalise a coaching methodology for developing and performing: a) Front Somersault Tucked b) Handspring Vault Gymnastics is a sport that been around since before the first set of Olympics. The early Romans and Greeks practiced forms of Gymnastics to obtain flexibility and physical fitness. The physics of Gymnastics are dependent on the manoeuvres being performed and the person who is performing. The handspring remains one of the most common upper level vaulting families. Coaches should recognise the benefits of a strong handspring in relation to all conventional approach vaults. Time well spent on the perfection of a handspring will in time lead to quality upper level vaulting success. In shape it is relatively simple to understand since the gymnast remains arched during most of the vault. It relies upon the gymnast making a run-up with enough speed to maintain a long shape during rotation. Needless to say both the run and the jump must be well performed. This vault can be broken down into five general phases with each one playing an important role in the outcome, diagram shown below: Following a short run and a hop, which brings the gymnast into the appropriate position, the gymnast performs a handspring by rotating through a handstand into the air and over to land in a standing position. ...read more.

while lifting your body to horizontal. Contact the surface with a blocking action, rebound from it and land on stomach on a skill cushion. * Trampoline bounces. Bounce on your hands on the trampoline. Phase 5: Afterflight and Landing - As the body rises after the repulsion phase, emphasis remains on maintaining a tight hollow position with the arms squeezing to the side of the head. In preparation for landing, it is helpful for the athlete to "SEE" something, but because we do not want them to drop their head out of line with the body, looking for the floor is not an option. Many coaches suggest spotting the wall. As the body contacts the floor the force is absorbed by bending the knees. The arms at this point drop from overhead, downward, sideways and then forward in order to assist with the balance. Coaches should be aware that although landings are certainly important, emphasis at the beginner levels should be on establishing speed, power, lift, distance, etc. Placing emphasis on "sticking the landing" early in the development encourages the gymnast to "back off" on the desired attributes so that they can control the landing. Drills: * Invert to handstand. On the floor, execute a hurdle and punch. ...read more.

Fitness in Gymnastics is often called conditioning and is divided into more specific types of work, each of which will improve some aspect of the physical condition of the body. Stretching - This will improve the gymnast's ability to perform skills and as with the dancer, will allow them to create more shapes and lines. Strength - This is made up of separate types of activity. The first is structure building, which exercises lightly, but often, the entire muscular frame of the body. Indeed, gymnastics exercises the parts that other sports cannot reach. The second category covers pure strength activities, which we all understand will give us the ability to lift heavier weights, chin a bar or kick a ball further. Muscular endurance, the third category, allows us to make more chin-ups or press-ups without feeling tired. The fourth category, that of dynamic power, is very important in gymnastics as many movements are performed at speed. The gymnast must exercise to have the explosive and accurate needed during complex routines. Stamina - This is something, which we usually relate to running games and sports. Stamina is vital to the gymnast during floor exercises when the lungs have to work very hard to keep the oxygenated blood flowing to feed the energy system which helps keep the muscles working. Training for gymnastics as for any sport will require stamina fitness. ...read more.