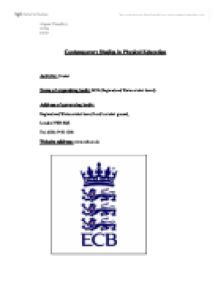 Contemporary Studies in Physical Education Activity: Cricket Name of organising body: ECB (England and Wales cricket board) Address of governing body: England and Wales cricket board Lord's cricket ground, London NW8 8QZ Tel: (020) 7432 1200 Website address: www.ecb.co.uk About The ECB The England and Wales Cricket Board was established on January 1 1997 as the single national governing body for all cricket in England and Wales. It has its headquarters at Lord's, the home of cricket. ECB's headquarters at Lord's in London The formation of the ECB represented a real determination to drive towards creating, for the first time, one single unified body responsible for the management and development of every form of cricket for men and women including clubs, schools, juniors and youth, disabilities cricket, representative, first class and international cricket. The ECB took over the many responsibilities carried out for some 30 years by the Test and County Cricket Board (TCCB), the National Cricket Association (NCA) and the Cricket Council, all of which have fulfilled to exist. In April 1998 the Women's Cricket Association (WCA) was also integratedwithin the system of the ECB. The further formation of the ECB followed two intensive years of research into how cricket in England and Wales could be organised better to attract more players to the game and to be level or better than other sports in England and Wales like football and rugby raise as this will therfore raise standards at all levels and promote cricket as a spectator sport to be seen throuhout the whole of England and Wales. ECB's Cricket's strategic plan - Building Partnerships The ECB now recently have unveiled the blueprint for cricket's continued success and development over the next four years with the proud launch of Building Partnerships in April 2005. Building Partnerships, which maintains the ECB's theme of 'From playground to Test arena', is built on four key elements to success towards the highest level which are: * Effective leadership and governance * Vibrant domestic game * ...read more.

This next scheme provided by the ECB is also a very effective for everyone to get involved for certain circumstances and make english cricket a higher standard in the near coming future. Inter Cricket was designed for boys and girls who, for reasons of facility or ability, can't play hard ball cricket. It bridges the gap between Kwik Cricket and the traditional hardball game, increasing levels of participation in the game, particularly amongst 12-14 year old children. Backed by NatWest, this major ECB grassroots initiative is ideal for use in secondary schools and clubs. Inter Cricket can be played in the playground or on grass, indoors or outdoors; it therefore underlines the ECB's commitment to promoting the game to, amongst others, inner city areas and ethnic minorities. Kids @ the wicket also is relatively new initiative provided by the test sponsors npower to get kids all excited about cricket and to get involved into it. Through this special initiative, groups of U13s can watch an international match from a specially reserved seating area - the [email protected]! On arrival at the [email protected] Welcome area, all children receive Kidz @ the wicket goody bags containing an energising cricket activity pack, called 'Sticky Wickets' tis is therefore designed and mapped to the National Curriculum by Key Stage 2 teachers and based on the ECB's HOWZAT! 1st Innings and also the kids can receive a cap, T-shirt, giant foam hand and pen. The last initative by the Ecb that I want to refer is Urban cricket. Urban cricket is also a new scheme provided by the ECB ensuring that the grassroots of english cricket are sound and are a godd foundation for young kids to take part in cricket for.It is aimed for children aged between seven and 12 years old, the ethos of Urban Cricket is simple - get out there and play. The project aims to introduce the game to a new young audience and to encourage children to actively participate in sport in a fun and learning experience way. ...read more.

The ECB also provides qualified coaches, umpires, scorers and good facilities which are very important as you move up the performance pyramid. I am committed to the sport as I train regularly and receive regular specialised coaching sessions from my county cricket coach on a weekly basis. The representative cricket at Hertfordshire has also helped me to play good quality men's cricket and to adapt to different sorts of players, pitches to improve my game. The Excellence level is the most elite level where elite performers represent their country in national and international competition. They will be fully committed to the sport and will train full time and receive financial, administrative, medical and personal support. This level is very hard to get to as you have to be very talented and have to stand out from the rest in your sport. ECB has helped me progress through its much organised structure and development that has been put in place from the foundation to performance level. Also another factor which has helped me progress from foundation to excellence are coaches, teachers, parents, access and facilities. The coaches that I have helped through my career so far are those involved with me at any early age and those involved with me at the performance and excellence level which are at club, district and county coaches. All of these factors have shown me to refine my skills, improve as a player and to progress with confidence which has shown through every stage in the performance pyramid up to the excellence level. My parents I have helped in a way that travelling to matches and going to training during the winter and summer through far way distances which hasn't hindered me to reach the level I am at. Also the facilities which have been provide to me are have helped through using good cricket equipment, good cricket grounds locally with my club and around the country playing for the county. ?? ?? ?? ?? Alqaas Chaudhry 12 Sn P.P.P ...read more.