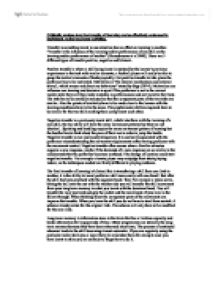 Critically analyse how the transfer of learning can be effectively enhanced in individual, racket and team activities.

Critically analyse how the transfer of learning can be effectively enhanced in individual, racket and team activities. Transfer is something learnt in one situation has an effect on learning in another. "Transfer is the influence of the learning and/or performance of one skill on the learning and/or performance of another" (Honeybourne et al 2000). There are 3 different types of transfer positive, negative and bilateral. Positive transfer is where a skill being learnt is assisted by the learner's previous experiences in the task with similar elements, a football player will easily be able to grasp the tactical elements of hockey quickly. For positive transfer to take place the performer has to be motivated. Motivation is "the internal mechanisms and external stimuli, which arouse and direct our behaviour" stated by Sage (1974). ...read more.

Negative transfer is a previously learnt skill, which interferes with the learning of a new skill, the two skills will have the same movement patterns but they are not identical. Sprinting and hurdling require the same movement pattern of running but the hurdler has to think about the pace of their run in order to jump the hurdle. Negative transfer is rare and mostly temporary. It is normally associated with the performer misunderstanding the movement requirements rather having problems with the movement control. Negative transfer often occurs when a familiar stimulus requires a new response, maybe if the demands of a new response are so similar to the old demands that the performer becomes confused. The change of location could start negative transfer. ...read more.

You will transfer the way you hold and grip the racket and the movement of your arm in the follow through. When thinking about the component parts of the movement can improve the transfer. When you learn the skill you do not have to start from scratch. A schema already exists for the original limb. The schema will only have to be modified for the new limb. Long-term memory is information store in the brain that has a limitless capacity and holds information for long periods of time. Motor programmes are stored in the long-term memory because they have been rehearsed may times. The process of continued rehearsal leads to the skill becoming almost automatic. If you are regularly using the particular motor skills you a more likely to remember them for example once you have learnt to skim you are unlikely to forget how to do it. ...read more.