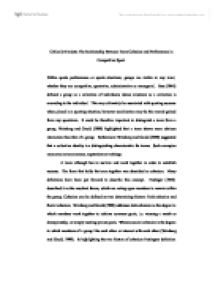 Critically Evaluate The Relationship Between Team Cohesion and Performance in Competitive Sport.

Critically Evaluate The Relationship Between Team Cohesion and Performance in Competitive Sport. Within sports performance or sports situations, groups are visible to any level, whether they are competitive, spectative, administrative or managerial. Bass (1960) defined a group as a collection of individuals whose existence as a collection is rewarding to the individual. This may ultimately be associated with sporting success when placed in a sporting situation, however socialisation may be the reward gained from any spectators. It could be therefore important to distinguish a team from a group, Weinberg and Gould (1999) highlighted that a team shows more obvious interaction than that of a group. Furthermore Weinberg and Gould (1999) suggested that a collective identity is a distinguishing characteristic for teams. Such examples may come as team names, reputations or rankings. A team although has to survive and work together in order to establish success. The force that holds the team together was described as cohesion. Many definitions have been put forward to describe this concept. Festinger (1950) described it as the resultant forces, which are acting upon members to remain within the group. Cohesion can be defined on two determining factors: Task cohesion and Social cohesion. Weinberg and Gould (1999) addresses task cohesion as the degree to which members work together to achieve common goals, i.e. winning a match or championship, or simply meeting pre set goals. Whereas social cohesion is the degree to which members of a group like each other or interact with each other (Weinberg and Gould, 1999). ...read more.

Eisler and Spink supported the belief that the cohesiveness of a team around a task may influence to an extent the perceived psychological motivation in a neutral or a positive situation. In translation towards sporting environments and the predicted cohesion-performance link may be effected by motivational factors. This was backed up by Widmeyer and Williams (1991) who found that member satisfaction was the major determinant of both task and social cohesion amongst golfers. Williams and Widmeyer (1991) highlighted that motivation of individuals may also be a problem that has to be addressed. The motivation problems may arise from the perception of the task. Perception of the task ahead may possible influence cohesion and also the individuals perception of cohesiveness may be related to an adherence issue factor (Prapvessis and Carron, 1997) such an adherence issue may be more applicable in the formation stages of a group. However problems with perception of cohesiveness may be that of an expectancy effect, which may underestimate any challenges to cohesion (Dirks, 2000). However personal factors may also include such factors as anxiety, which to an extent may be detrimental to performance. (Weinberg and Gould, 1999) Prapavesis and Carron (1996) found that C.S.A.I (Competitive State Anxiety Inventory) A-state responses were a consequence of cohesion. It must be addressed that some individuals do not just participate for the success, they may participate for the social for the enjoyment and although this may possibly cast doubts over the sources of cohesion, but as Donnelly (1994) ...read more.

This was pointed out, as it was unknown when the effects of cohesion on performance would be noted or become difficult to highlight specific changed when using a correlation system, which is often adopted during many tests. Although a more recent study by Li and Harmer (1996) proposed that the GEQ has adequate factorial validity for measuring group cohesion. Li and Harmer had acted upon claims by Schultz et al., (1994) that the GEQ was an invalid measurement tool for group cohesion. In conclusion it has been shown that an effect for the cohesion-performance linkage does exist, (Mullen and Cooper, 1994) although the extent to which has been discussed (Grieve et al., 2000). It was also found that the relationship between cohesion and performance may have been effected by such factors as suggested by Carron (1982). Problems arising from a causality effect were discussed and it still remains unclear as to which variable actively effects the other. Other limitations regarding administration of the questionnaire for measurement of cohesion have been discussed and the validity of the G.E.Q has been discussed (Brawley, 1990). Overall it may be concluded that research still remains open to the full extent of the relationship. For future research in this area, the causality effect should be investigated and also authors should attempt to move away from correlational studies, to try and establish more viable results. Research should also be encouraged to examine further the differences between group types (interacting or coacting). Any further research would therefore enhance the understanding between the link of cohesion and performance. ...read more.