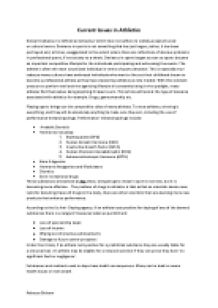 ﻿Current Issues in Athletics Deviant behaviour is defined as behaviour which does not adhere to widely-accepted social or cultural norms. Deviance in sports is not something that has just begun; rather, it has been portrayed and, at times, exaggerated to the extent where there are reflections of obvious problems in professional sports, if not society as a whole. Deviance in sports began as soon as sports became an important competitive lifestyle for the individuals participating and witnessing the events. The athlete is often the most scrutinized individual in terms of sports deviance. This is especially true today as many cultures have embraced individuals who want to live out their childhood dream to become a professional athlete as they have viewed top athletes as role models. With this constant pressure to perform well and the agenising lifestyle of constantly being in the spotlight, many athletes find themselves doing anything it takes to win. This article will look at the type of deviance associated with athletics for example: Drugs, gamesmanship etc. Playing sports brings out the competitive sides of many athletes. To most athletes, winning is everything, and they will do absolutely anything to make sure they win, including the use of performance-enhancing drugs. Performance- enhancing drugs include: 1. Anabolic Steroids 2. Hormones including: 1. Erythropoietin (EPO) 2. Human Growth Hormone (hGH) 3. Insulin-like Growth Factor (IGF-1) 4. Human Chorionic Gonadotrophin (HCG) 5. Adrenocorticotropic Hormone (ACTH) 1. Beta-2-Agonists 2. Hormone Antagonists and Modulators 3. Diuretics 4. Even recreational drugs These substances are banned at ALL times. ...read more.

Some commentators have suggested that Blake himself could, and maybe should, have been disqualified. The IAAF rules state that once the athletes are in the "set" position, they must not move, and Blake's leg clearly twitched. It was that rule which caused Dwain Chambers to be disqualified in his semi-final. Another example of a false start was Christine Ohuruogu who was disqualified from the 400m in the worldchampionships in 2011. Such events are extremely rare in the 400m, but Ohuruogu came out of her blocks way ahead of any of her rivals. She told Channel 4 that, "I knew it was me straight away. I can't believe it. I just wanted to get a good start as I knew it was going to be a fast round." Under the new false-start regulations brought in by the IAAF at the start of 2010, she was allowed no warning nor second chance and was shown a red card by officials before being ushered off the track in a state of shock she commented to the BBC that, "I've just wasted all that hard work, it's just wasted.? Gender issues and equality: Gender issue take two different forms in athletics. The two forms: 1. Gender equality- The number of men and woman in sport 2. Gender issues- Verifying the eligibility of an athlete to compete in a sporting event that is limited to a single sex. Gender issues are a rare occasion in athletics. The issue arose a number of times in the Olympic Games where it was alleged that male athletes attempted to compete as women in order to win. ...read more.

According to the British government: Every secondary school will receive funding up to the end of the academic year in 2013 to pay for one day a week of a PE teacher?s time to be spent out of the classroom, encouraging greater take-up of competitive sport in primary schools and securing a fixture network for schools to increase the amount of intra- and inter-school competition. Lottery funding from Sport England will also be deployed to build a framework of competitions as part of the new School Games. Though in recent surveys, doctors found 17 per cent of boys and 16 per cent of girls between 12 and 15 are classed as either overweight or obese and nearly three quarters of children are not getting their recommended 60 minutes of daily activity. But with the recent London Olympics the number of children regularly taking part in competitive sport has gone up, a new government report shows, but it's still less than half of all pupils ? increasing from 28% last year to 39% this year. This shows major events have had an impact on younger children but as it states there is still not enough young peole taking part and there is a many of excuses for avoiding it. Even when people leave school at the age of 18 involvement in sport drops dramatically as they have no longer sport as a complusory part of their acedemic cirriculum. The British government along with Sport England have launched their campaign ?Sport; a habit for life? this will focus mainly on the youth, facilities and physical education in schools all over the UK with the aim of increasing participation. Rebecca Dickson ...read more.