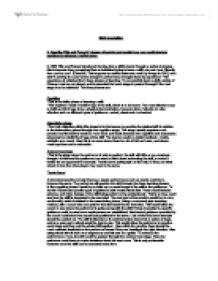 Skill Acquisition 3. Describe 'Fitts and Posner's' phases of learning and explain how you would structure practices to enhance a performance. In 1967 Fitts and Posner introduced the idea that a skill is learnt through a series of phases, this is because they recognized that an individual trying to learn a skill, can not move "directly from can't to can". (Edexcel). This supports an earlier statement made by Knapp in 1973, who said "Learning is a permanent change in performance brought about by experience" This experience is obtained from these phases of learning. To successfully learn a skill a series of Phases must be completed, and its essential that each stage is passed through if the next stage is to be obtained. The three phases are: Cognitive -This is the initial phase of learning a skill. -This requires a basic mental image of the skill, which is to be learnt. The most effective ways to build up this image is by a physical demonstration, however other methods are also effective such as different types of guidance: -verbal, visual and mechanical. Associative phase -The main objective within this phase is for the learner to practice the desired skill in relation to the information gained through the cognitive stage. ...read more.

Lots of trial and error attempts should be carried out. The skill is discrete so it could be broken down into a series of steps, and so a pure part method would be best to use. This would allow the performer to practice each stage and then put the whole skill together. Also within the practice there should be much extrinsic feedback so the performer knows if they are heading in the right direction. Also using visual stimuli such as a target to try and hit acts as a guide. To enhance the performance more, the skill could be passed through the autonomous stage. Here the performer could learn to make decisions about his next move. This is only achievable however once the skill can be executed every time. The serve is made of 4 routines. A-toss B-racket back C-strike D-follow-through. Cricket Bowl In the cognitive phase it will generally consist of performer seeing what the action looks like. This mostly involves visual guidance, such as photographs, videos, and specific coaching instructions. The associative phase of the practice phase will involve repeating the action many times until the skill is to be done with little or no conscious thought. ...read more.

However, the technique is important it does require certain amounts of explosive power. Weight training can be used to improve this component. E.g. Heavy weights few repetitions. The concept of the learning phases, is a valuable source for establishing the ability of a performer to do certain skills. If a weakness is found a coach could extract this skill from the game/event and can put the player through a series of phases such as these above.This will give the coach an idea which phase of the skill is giving the performer trouble. The coach can then give feedback about the performance. Mostly negative if they are struggling with the skill because then the phases can be restarted from the beginning. However only a certain amount of negative feedback should be used as it can de-motivate the performer. This should then help to improve the players overall performance, and the teams, if applicable. I have outlined practices and methods of improving skills with reference to these phases, Designed by Fitts and Posner, to help improve a team, Individual and racket sport. The phases of learning can go in both directions, which benefits designing practices around them, as you can either progress through them, or if a certain phase is poor you can go back to the phase and relearn that area, before progressing. ...read more.