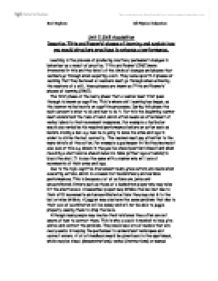 Describe 'Fitts and Posner's' phases of learning and explain how you would structure practices to enhance a performance. Learning is the process of producing relatively permanent changes in behaviour

Unit 2 Skill Acquisition Describe 'Fitts and Posner's' phases of learning and explain how you would structure practices to enhance a performance. Learning is the process of producing relatively permanent changes in behaviour as a result of practice. 'Fitts and Posner' (1967) were interested in this and the detail of the kinds of changes and phases that learners go through when acquiring a skill. They came up with 3 phases of learning that they believed all learners must go through when achieving the mastery of a skill, these phases are known as 'Fitts and Posner's' phases of learning (1967). The first phase or the 'early phase' that a learner must first pass through is known as cognitive. This is where skill learning has begun, as the learner relies heavily on cognitive processes. During this phase the main concern is what to do and how to do it. For this the beginning learner must understand the task at hand, which often means an attachment of verbal labels to their movement responses. For example a footballer would also verbalise his required performance before an action such as before kicking a ball e.g. how he is going to move his arms and legs in order to strike the ball correctly. ...read more.

A rugby player may use this practice by starting off with a 25m sprint, followed by a 30 second rest, another 25m sprint, 30 seconds rest and so on. A runner may do the same and so may a swimmer e.g. 10m breast stroke sprint, 30 second rest, 10m back stroke sprint, 30 second rest an so on. Closed drills are also very important as they have low pressure with a consistent environment, such as in football a player may do shuttles or dribble a ball around a cone but at self paced (very important), a juggler may do catching drills with a partner and a tennis player may also do shuttles whilst running with a racket. Use of a demo from a more skilled person or model may also be used as it is seen as a something to work around and to help you improve. The next phase a learner must pass through is the 'intermediate' or the 'associative' phase. This is primarily concerned with practicing the newly required skill. At this phase the learner shows a lot more consistency and coordination has improved much more rapidly. Also improvements such as timing are shown. At this phase the learner will also produce basic mechanics of the skill and make associations with previously learned material, allowing ...read more.

The final phase is the autonomous phase. It is called this because the performer is capable of producing skilled actions automatically with little or no conscious control to movement production. Movements are smoother and efficient with attention that can be given to relevant cues and signals from the environment, as less mental capacity are needed to carry out the skill itself. The performer also realises their mistakes/errors as they have become more aware and are capable of correcting them themselves with little or no help. The types of practices used at this phase should be realistic as possible such as competitive games and cups. For example in swimming the Olympics and common wealth games, in rugby the six nations and world cup. The performer should use variable practices such as passing, shooting and movement drills in netball. Also structured feed back is required (with an aid of videos). In conclusion I have found out that we all learn by passing through different stages. As you progress through each stage you improve in ability, skill and awareness. During these stages to help you improve there are also certain drills and factors such as videos and the use of role models that are so vital in the progression of learning and improvements. ?? ?? ?? ?? Karl Hopkins AS Physical Education ...read more.