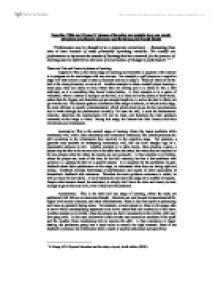 Describe 'Fitts and Posner's' phases of learning and explain how you would structure practices to enhance a performance, by Naomi Brook "Performance may be thought of as a temporary occurrence ... fluctuating from time to time because of many potentially operating variables. We usually use performance to represent the amount of learning that has occurred, for the process of learning must be inferred on the basis of observations of change in performance."�1 These are Fitts and Posner's phases of learning: Cognitive: This is the initial stage of learning and therefore is essential if the learner is to progress to the next stages with any success. For example, a golf player at a cognitive stage will look at how a type of shot is executed and try to copy it. They are likely to hit the ball in the wrong direction, or not at all. Another example is when a netball player learning a chest pass, they are likely to miss where they are aiming and it is likely to feel a little awkward, as it is something they haven't done before. ...read more.

Therefore the main guidance necessary is verbal, as well as visual for new skills. A lot of learners do not leave this stage for a number of reasons. People often become bored, de-motivated, or simply don't have the time and money to train enough to get to the next level, even if they have the potential. Autonomous: This is the third and last stage of learning, where the tasks are performed with little or no conscious thought. Attention can now be paid to specialised skills, higher level tactical elements, and other considerations. There is less time spent on processing and more on generally being aware. For example, a tennis player is, when in this stage, able to serve whilst contemplating opponents next move, rather than the mechanics of the serve. Another example is in cricket, where the player can bowl consistently to the wicket, with very few going wide. In this case, the bowler is able to take into account to condition of the pitch and the weather when considering how to execute the skill. A final example is in figure skating, the performer going into a triple salco at exactly the right moment. ...read more.

progress to the autonomous stage, getting them to notice their own errors, like why they are not hitting the board with enough force. It is essential for coaches to know these stages so that they may not expect too much too quickly of their pupils, and therefore overload and discourage them. The cognitive stage often involves verbal repetition, which often helps with the mental picture and transferring the information into the long-term memory, where it is more likely to be an autonomous skill. For example, in dance, the learner may repeat a sequence of; "side together, side hop". They are likely to have problems in processing information concerning their limbs, and so that is the main element they pay attention to. The same type of situation occurs in basketball, when a beginner dribbles the ball, they will pay attention to where the ball is, rather than where they're going. The more complex the skill is, the longer it will take to learn the requirements of it. I conclude that these stages are essential for the development of any sport so that the leaner may be given enough information for motivation purposes, but not too much for overload and discouragement. ...read more.