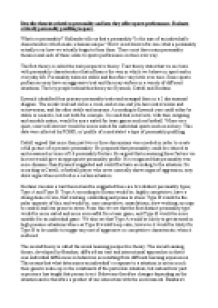 ﻿Describe theories related to personality and how they affect sports performance. Evaluate critically personality profiling in sport. What is a personality? Hollander tells us that a personality ''Is the sum of an individual's characteristics which make a human unique.'' But it is not known for sure what a personality actually is or how we actually begin to form them. There exist three main personality theories and each of them relate to sports performance in their own way. The first theory is called the trait perspective theory. Trait theory states that we are born with personality characteristics that influence the way in which we behave in sport and in everyday life. Personality traits are stable and therefore vary little over time. Some sports performers may have an aggressive trait and this may surface in a variety of different situations. The key people behind this theory are Eysenck, Cattell and Girdano. Eysenck identified four primary personality traits and arranged them in a 2 dimensional diagram. ...read more.

Girdano was also a trait theorist and he suggested there are two distinct personality types, Type A and Type B. Type A according to Girano would be; highly competitive, have a strong desire to win, fast working, controlling and prone to stress. Type B would be the polar opposite of this, and would be; non-competitive, unambitious, slow working, no urge to control and less prone to stress. From this we see that the first distinct personality type would be more suited and more successful for a team game, and Type B would be more suitable for an individual game. We also see that Type A would be likely to get stressed in high pressure situations where as Type B would keep calm, however it would be likely for Type B to be unable to trigger any sort of aggressive or competitive characteristic when it mattered. The second theory is called the social learning perspective theory. The social learning theory, developed by Bandura, differs from trait and interactional approaches in that it sees individual differences in behaviour as resulting from different learning experiences. ...read more.

Personality profiling is done to see which personalities are fit for what sport, and if a certain individual personality is one that all athletes may share. This is difficult due to the fact there is no clear, universal definition of a personality. Personality profiling involves measuring an athlete on a number of personality scales and building up a picture of their strengths and weaknesses. Tests can be measured in a various number of ways, through; questionnaires, interviews, observations or profile of mood states. There are a number of problems with personal profiling though. There is no conclusive evidence that a sports personality actually exists, so far there only exists theories surrounding the matter and no hard evidence. Profiling results are usually subjective, and conclusions may be influenced by personal opinions with no support of scientific evidence. Profiling results are invalid more often than not. It is feared that an athlete may unconsciously modify their own behaviour to match up to the profile ascribed to them. There also exists a reliability issue, due to the fact questionnaires are often carried out using self report, so therefore not always answered correctly or honestly. ...read more.