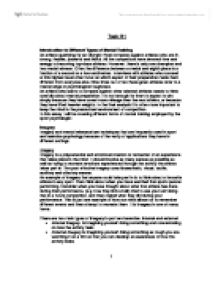 Task: B1 Introduction to Different Types of Mental Training An athlete qualifying for an Olympic Final competes against athletes who are fit, strong, flexible, powerful and skilful. All the competitors have devoted time and energy to becoming top-class athletes. However, there is only one champion and two medal winners. Often the difference between a medal and eighth place is a fraction of a second or a few centimetres. Interviews with athletes who succeed at this highest level often focus on which aspect of their preparation made them different from everyone else. Nine times out of ten these great athletes refer to a mental edge or psychological toughness. An athlete who wants to compete against other talented athletes needs to think carefully about mental preparation. It is not enough for them to expect to win simply because they have coved more mileage then the next athlete, or because they have lifted heavier weights. In the final analysis it is often more important to keep the mind in the pressurized environment of competition. In this essay I will be covering different forms of mental training employed by the sport psychologist. Imagery Imagery and mental rehearsal are techniques that are frequently used in sport and exercise psychology because of the verity of applications they have in different settings. Imagery Imagery is a polysensorial and emotional creation or recreation of an experience that takes place in the mind. It should involve as many senses as possible as well as trying to recreate emotions experienced through the activity the athlete takes part in. The post effective imagery uses kinaesthetic, visual, tactile, auditory and olfactory senses. An example of imagery that anyone could take part in is to think about a favourite athlete in any sport. Then think about when you have watched that sports person performing. Consider when you have thought about what that athlete has done during their performance, (e.g. ...read more.

Arousal Arousal is an important aspect of sport and exercise because it can affect performance either positively or negatively depending on how you perceive the arousal. Therefore it is important to understand ways of regulating arousal and how this can benefit performance. Arousal Reduction Over-arousal is often experienced by athletes for reasons such as lack of confidence or seeing competition as a threat. The effects of over-arousal are generally the same regardless of the performer: physical and psychological discomfort that leads to reduced performance. The role of the sport psychologist would be to help the athlete to understand the causes of over-arousal to recognise the symptoms of over-arousal and then to help athletes to apply appropriate arousal management strategies to reduce levels to an optimal point. Common arousal reduction techniques include progressive muscular relaxation, breathing control, biofeedback, mind to muscle techniques and imagery. Progressive Muscular Relaxation Muscle tension is one of the most uncomfortable and devastating symptoms of an over-aroused state and can severely hinder performance due to losses in coordination (and therefore disrupt technique). It can also lead to an increased risk of injury due to vastly decreased flexibility. Progressive muscular relaxation (PMR) is an easy to use technique that can help to reduce muscular tension. It is a useful technique because it increases an individual's awareness of their levels of muscle tension and through the relaxation phase helps the individual to distinguish between what is a state of tension and relaxation. Breathing Control When you start to experience increased pressure in sport situations an automatic tendency is to hold your breath a little. Unfortunately when you do this it increases factors that can be negative to performance (like muscle tension). The best time to use breathing control is when you are in a sporting situation that allows you to take a brake. Controlled breathing is one of the easiest techniques for reducing anxiety symptoms and it has a range of physiological and psychological benefits. ...read more.

They relate to skills and technique they could be required to perform at a high level. Performance Goals Performance goals look at achieving a certain standard of performance without comparison with other individuals. This means that basically your competing with yourself. (E.g. increasing percentage of shots on target form 40% to 60%). When using performance goals regularly the athlete is trying to improve their own performance with a view to increasing the sense of mastery in performance. Principles of Goal Setting For goal setting to be effective it is important to set a range of outcome, process and performance goals. Goal setting should follow the S.M.A.R.T principal. Importance of goal setting Goals benefit performance in the following ways: * They motivate a performer to develop new strategies, tactics and mechanisms that re needed for performance to be successful * They control and mobilise the amount of effort needed and expanded by the performer to achieve an expected standard. * They direct the attention of the performer towards key aspects of the skill that is being performed by the individual. * They increase the level of effort that is needed until the goal is achieved. Performance Profiling Performance profiling is another technique available to sport and exercise psychologists to influence the motivation of sports performers. Their maybe a situation were you and your couch have different opinions on how you performed in your recent game (e.g. you thought you played well but your coach did not or visa versa). This is quite common in sport and performance profiling is one method used to try and eliminate the difference in opinion. Performance profiling helps to increase motivation here are two examples: * It can give the performer a greater sense of control over what they are doing which in turn increases there sense of achievement and mastery - two key areas in increasing intrinsic motivation. * It is a good way of increasing communication between the coach and the athlete making them both feel like they are more on the same wavelength. ...read more.