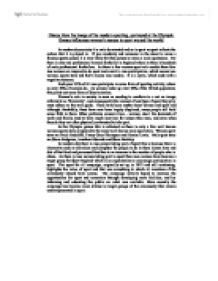 Discus How the image of the modern sporting, portrayed at the Olympic Games influences women's access to sport around the world.

Discus How the image of the modern sporting, portrayed at the Olympic Games influences women's access to sport around the world In modern day society it is male dominated and so is sport as sport reflects the culture that it is played in. If you randomly ask someone in the street to name a famous sports person it is very likely for that person to name a male sportsman. For there is only one professional women footballer in England where as there is hundreds of male professional footballers. As there is few women sport role models there fore less women are inspired to do sport and overall a less participation, which means less women, sports stars and that's means less models. ...read more.

Women's role in society is seen as needing to conform to a set an image, referred to as 'femininity', and consequently the amount of and type of sport they play must adhere to this trait guide. There have been myths about women and sport and although, thankfully, these have now been largely displaced, many people still hold some faith in them. Other problems concern time - women, due t the demands of work and family, tend to have much less time for leisure than men, and even when they do they are often physically exhausted to take part. ...read more.

As there is less women taking part in sport than men women have become a target group for Sport England which is an organisation to encourage participation in sport. The sport for all campaign, originally set up in 1972 and still continuing, highlights the value of sport and that was something to which all members of the community should have access. The campaign initially hoped to increase the opportunities for sport and recreation through developing more facilities, and by informing and educating the public on what was available. More recently the campaign has become more diverse to target groups of the community that remain underrepresented in sport. ...read more.