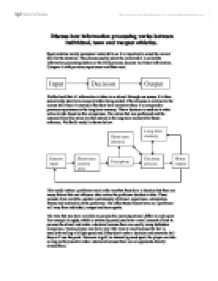 Discuss how information processing varies between individual, team and racquet athletics. Sport contains mainly perceptual motor skills so it is important to select the correct skill for the situation. The process used to select the correct skill is called the information processing system or the DCR process, because we Detect information, Compare it with previous experiences and then react. Welford said that all information is taken in as stimuli through our senses. It is then stored in the short term memory before being sorted, if the stimulus is relevant to the current skill then it is stored in the short term memory where it is compared to previous experiences in the long term memory. Then a decision is made as to what action to take based on this comparison. The action that was performed and the outcome from this action are then stored in the long term memory for future reference. Welford's model is shown below: This model makes a performer react in the way that they do to a situation but there are many factors that can influence what action the performer decides to take. These include; time available, number and intensity of stimuli, experience, anticipation, fitness and motivation of the performer. The effect these factors have on a performer will vary from individual, racquet and team sports. ...read more.

But in individual and racquet sports the playing surface is fairly constant with the exception of golf, where a stance may have to be altered to adjust to the surface. Kinaesthesis: this is where the body senses the muscle movement and contraction it is sometimes known as muscle memory. It is if the movement "feels" right to the performer. It is developed through practice and experience one example would be a conversion kick in rugby the player may take there step away from the ball in the same way they usually do but they may just "feel" that they are not in the right place. It doesn't apply as much in team games as in individual and racquet sports apart from set plays. Tactile sense: this is the feeling of pressure this is important for all sports. It can be affected be the weather conditions because cold weather affects our ability to feel effectively. The short term sensory store is where all information is stored for a split second before it is processed. All relevant and irrelevant information is stored in here before it is replaced and lost. This does not differ between sports only what enters it does. The perception stage is where all the information that has come from the short term sensory store is processed. ...read more.

Whereas in an individual sport there is much less information and less possible actions. The motor output is the performance of the chosen skill. One example may be for a badminton player to put in a drop shot because the opponent is at the back of the court. The action is referred to the muscle movement in the LTM. The action and its consequences are then stored in the long term memory for future reference. Individual sports, because they are individually paced, make them the simplest in the IP model. Also because there are fewer stimuli there is a shorter reaction time which gives the performer more time to carry out the IP model which should result in a better decision. Racquet sports are externally paced due to the fact that there is an opponent; this means that there is less time for the performer to react. There are some irrelevant stimuli which will slow down the IP model which means it takes longer to decide than in an individual sport but not as long as in a team sport because there are fewer possibilities for what action to take. Team sports are externally paced which reduces the time available to react. Also there are much more irrelevant stimuli in team sports, this will lengthen the IP. The IP will also be lengthened due to the complexity of most team games because there are more situations and possible responses to choose from. ...read more.