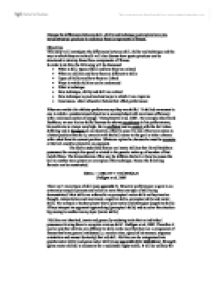 Discuss the differences between skill, ability and technique and explain how you would structure practices to enchance those components of fitness.

Discuss the differences between skill, ability and technique and explain how you would structure practices to enchance those components of fitness. Objectives This essay will investigate the differences between skill, ability and technique and the way in which they are related it will also discuss how sports practices can be structured to develop these three components of fitness. In order to do this, the following will be discussed * What is skill, types of skill and how they are related * What are abilities and how they are different to skills * Types of ability and how they are linked * Ways in which abilities can be enchanced * What is technique * How technique, ability and skill are related * How technique is practiced and ways in which it can improve. * Conclusion- other influential factors that affect performance When we watch elite athletes perform we say they are skilful. 'A skilled movement is one in which a predetermined objective is accomplished with maximum efficiency with a minimum outlay of energy.' Honeybourne et al, 2000 . For example take David Beckham, we see him as skilful because he shows consistency in his performances, his work rate is always very high. ...read more.

Other examples showing how skill and technique do not necessarily correlate are when a golfer with a technically perfect swing would be inefficient without a degree of accuracy and a discus thrower with the perfect turn would be inefficient without the speed and strength to propel the discus. All the above examples prove that skill = ability + technique. In the way that lacking in ability and/ or technique will cause a problem with the type of skill being performed. 'The efficiency of your swimming stroke is the key to success as a competing or training swimmer,' Peak Performance July 2000. This can be explained in the way that the efficiency of a stroke will significantly reduce wasted energy output through less drag in the water and a cleaner execution of hand and arm entry and recovery. When energy resources of all competitors racing are depleted the winner will be the swimmer that withholds the best stroke technique. Technique can be taught in two main ways; learning the whole method or learning the part method. When technique is being practiced abilities are also incorporated. For example when the technique of an axe kick in karate is being practiced abilities such as flexibility to gain height on the kick and balance to avoid stumbling on one leg are necessary. ...read more.

However successful sports performers that practice a wide range of sports are suggested to possess a superability which underlies and aids specific groups of abilities that are necessary for most types of skill production. For example speed and flexibility are essential in practically every sport skill. IV Top Tots programme provides children from the age of eighteen months to three years with a fun introduction to physical activity. This programme caters for such a young age range consists of a rucksack containing colourful, tactile and safe equipment which has been proven to develop physical skills, movement and co- ordination, concentration and encouraging co- operative play with others V In the early stages of learning abilities that are known as perceptual abilities (concentration, cue reading, attention and vision) are important. However in the later stages of learning making use of perceptual abilities are replaced with 'an inner sense of feeling that this movement is correct,' 2.3.3 this is called kinaesthesis (see appendix vi). This involves making use of more specific and fewer abilities. VI Definition of Kinesthesis (Honeybourne et al, 2000) This is the information we hold within ourselves about our body's position. The information comes from receptors found in the muscles, tendons and joints. The term proprioception is often used in the same way. ...read more.