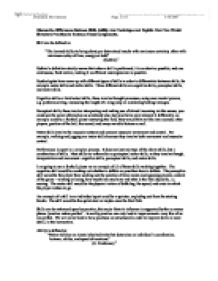 Discuss the Differences Between Skill, Ability And Technique and Explain How You Would Structure Practices to Enhance These Components

Discuss the Differences Between Skill, Ability And Technique and Explain How You Would Structure Practices to Enhance These Components. Skill can be defined as: "The learned ability to bring about pre-determined results with maximum certainty, often with minimum outlay of time, energy or both" (Guthrie) 1 Guthrie's definition strictly means that when a skill is performed, it is as short as possible, and one continuous, fluid motion, making it as efficient and ergonomic as possible. Psychologists have come up with different types of skills in order to differentiate between skills, for example motor skills and verbal skills. Three different skills are cognitive skills, perceptual skills, and motor skills. Cognitive skills or Intellectual skills, these involve thought processes, using ones mental powers, e.g. problem solving, measuring the length of a long jump or calculating batting averages. Perceptual skills, these involve interpreting and making use of stimuli incoming via the senses, you could see the same information as somebody else, but your brain may interpret it differently, an example could be a football player surveying the field, they would have to take into account, other players, position of the ball, the crowd, and many variable factors as well. Motor skills involve the muscular system and concern muscular movement and control. ...read more.

in an organised way in order to carry out coordinated movement, a skill. A skill can only occur once someone has learned and is confident in his or her own abilities, and has practised using it to perform the efficiency required of a skill. An example of ability in a game situation would be a football player using their abilities of gross body coordination, stamina, dynamic strength and visual tracking, to follow are play the game. Using the sprinter again, exploding from the blocks, the abilities concerned. Would be having good reactions and a lot of power Ability is innate; it therefore cannot be improved upon in the same way as skill can, through practice. The only way to develop and enhance ability is to learn it. Testing for a skill is normally quite simple; a standardised test would work, i.e. to test the skill of dribbling in football you could set up a short course. You cannot test for ability in quite the same way, it has to be assessed over time, and a lot of evaluation must go into the observed characteristics to differentiate skill and skill from ability. If ability is not trained, the full potential of a learner can never be reached. To train ability you need motivation. ...read more.

However it also suffers from the weaknesses of the pure-part method in that because the skills are taught in stages, broken up, learners in the cognitive stage of skill development may find it hard to create a mental image of the overall skill and this would result in the loss of confidence and overall picture of what they should do. The progressive-part method is slightly dissimilar to the other methods. The skill is broken down into parts, part A is taught, then part B then both A and B together. This overcomes the problems in the previous methods in that it allows a clear mental image of the skill to be formed during the cognitive stage. As well as this it also allows flexibility in the approach, allowing the method to be developed appropriately for a particular skill. Whichever method is used for training the benefits must outweigh the drawbacks. Many believe that although the part methods are helpful, teaching and learning the skill ultimately as a whole is better. This implies that as the learner progresses, so must the particular method of training. More complex skill can be taught with a part method initially, but when a learner is competent and has a good ability for a sport they can be taught complex methods as a whole, ultimately improving them and their game still further. ...read more.