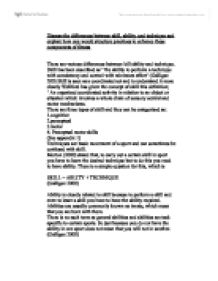 Discuss the differences between skill, ability, and technique and explain how you would structure practices to enhance these components of fitness

Discuss the differences between skill, ability, and technique and explain how you would structure practices to enhance these components of fitness There are various differences between kill ability and technique. Skill has been described as' 'the ability to perform a technique with consistency and control with minimum effort' (Galligan 200) Skill is seen as a coordinated act and to understand it more clearly Wellford has given the concept of skill this definition; ' An organised coordinated activity in relation to an object or situation which involves a whole chain of sensory central and motor mechanisms. There are three types of skill and they can be categorised as: 1.cognitive 2.perceptual 3.motor 4. Perceptual motor skills (See appendix 1) Techniques are basic movement of a sport and can sometimes be confused with skill. Morton (2000) stated that, to carry out a certain skill in sport you have to learn the desired technique but to do this you need to have ability. ...read more.

This is because it has been practiced so many times. To do this a session has been planned so different skills are continually repeated. VARIABLE PRACTICE (see appendix 3) For example Dribbling the ball in hockey. 1.Ball being pushed back and forward while stationary. 2. Ball being pushed while walking slowly 3. Jogging 4.running, 3 and 4 are more open. Also included in racket games. E.g. badminton. A badminton coach will feed the shuttlecock to a performer in different directions so the performer is used to playing the shuttle in various places from different angles. So to improve the performers performance the practices would have to be mainly structured from this. Practice can be organised in two different ways: . MASSED PRACTICE Massed practice is usually used for experienced performers because it involves long periods of practice with no breaks. The performer has to be constantly involved in the practice. This type of practice is good for skills, which require repetitive movement patterns for example . ...read more.

The third type is motor skills, which involved the muscular system and is made up of control and movement. . E.g. hitting b***s running and walking. Most skills are referred as perceptual motor skills as they involved thought interpretation and movement. E.g. SEE --> INTERPRET--> THINK--> MOVE Appendix2 Can also be referred to as 'over learning'. This type of practice requires a performer to continually repeat a set movement pattern until it learned and becomes habitual (second nature) Fixed practice is idea for skills that are always carried out in the same way and closed, interactive, and coactive skills tend to need fixed practice. Appendix3 Practice conditions are varied so the number of possibilities can be reduced. This type of practice is vital for open skills where different movement patterns can be stored in the long-term memory in case a similar situation occurs in a game. Variable practice is vital for open and interactive skills as this type of skill is never the same twice. These are usually taught in a closed environment and once developed can be moved into a open environment Vicky Bowen ...read more.