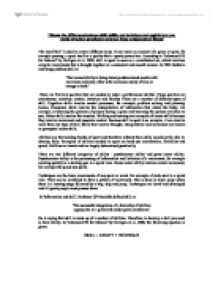 'Discuss the differences between skill, ability and technique and explain how you would structure practices to enhance these components of fitness'

'Discuss the differences between skill, ability and technique and explain how you would structure practices to enhance these components of fitness' The word 'skill' is used in several different ways. It can mean an element of a game or sport, for example passing, a sport itself or a quality that a sports person has. According to 'Advanced PE for Edexcel' by Galligan et al, 2000, skill in sport is seen as a coordinated act, which involves complex movements that is brought together in a consistent and smooth manner. In 1963 Gutherie and Knapp defined skill as: 'The learned ability to bring about predetermined results with maximum certainty, often with minimum outlay of time or energy or both.' There are five key qualities that are needed to make a performance skillful. These qualities are consistency, accuracy, control, intention and fluidity. There are a number of different types of skill. Cognitive skills involve mental processes, for example problem solving and planning tactics. ...read more.

Therefore, to develop a skill you need to have ability. In 'Advanced PE for Edexcel' by Galligan et al, 2000, the following equation is given: SKILL = ABILITY + TECHNIQUE This equation shows that ability and technique are associated with skill. In order to be able to perform a skill correctly, the correct technique is needed. To be able to learn the technique, you need to have the necessary abilities. For example, in gymnastics, the abilities of balance, strength and flexibility are needed to learn the correct technique to perform a handstand, which is the skill. Without ability and technique, a skill will not be able to develop fully. A quote by Knapp in 1963 states that: 'Skill is gained through learning. Skill is said to be learned behavior.' Both skill and technique are learnt and developed, whereas ability is innate. Because skill and technique are learnt, they are dependent on practice to be able to progress. ...read more.

To teach a beginner a skill, the best method to use would be a combination of the whole-part-whole method and the progressive-part method. Carrying out the whole skill first allows the learner to see what the whole skill is like so they know what they are aiming to achieve. Breaking the skill down into parts would enable them to concentrate on a small chunk of the skill at a time, so that they can perfect each part. Having performed the whole skill first, they will understand how each part is involved in the skill. After each part has been learnt, it would be useful to then 'chain' the parts together, practicing the first two parts together, and then linking on the third part and so on until they are able to perform the whole skill correctly. A skill practice for a more experienced person would be based on the pure-part method. This would allow them to practice each part of the skill separately to improve the standard of the overall skill. The whole skill could then be carried out to see how the practice of the individual parts has improved the overall performance of the skill. ...read more.