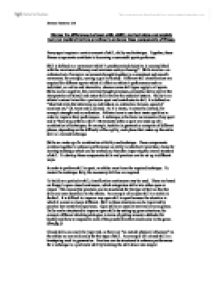 Discuss the differences between skill, ability and technique and explain how you would structure practices to enhance these components of fitness. Every sport requires a certain amount of skill, ability and technique. Together, these fitness components contribute to becoming a successful sports performer. Skill is defined as a movement which "a predetermined objective is accomplished with the maximum efficiency and minimum outlay of energy". Skills involve a co-ordinated act of complex movements brought together in a consistent and smooth movement, for example, scoring a goal in hockey. Different skill classifications are required for different sports which all affect an athlete's performance such as individual, co-active and interactive, whereas some skill types apply to all sports. Skills can be cognitive, this involves thought processes, perceptual skills involve the interpretation of stimuli and motor skills involve the muscular system. Ability is an athlete's natural talent for a particular sport and contributes to skill, it is defined as "inherited traits that determine an individuals co-ordination, balance, speed of reactions etc." (R.Arnot and C.Gaines) As it is innate, it cannot be learned, for example strength and co-ordination. Athletes learn to use their innate qualities in order to improve their performance. A technique is the basic movements of any sport and is "how you perform a skill". ...read more.

For example, in gymnastics a handspring vault can be broken down into a series of preparation movements. Once each phase is mastered they can be joined together to complete the skill. (See fig.2) The purpose of the preparations is to identify and develop the different components of the skill, this is the cognitive phase. Once the components of the skill are linked into a continuous action, the associative phase, the skill can then be developed into a learned skill so that it becomes automatic, this is the autonomous phase. Drill practices should be identified to improve specific aspects of technique or correct faults and produce a specific effect, for example, moving into the middle of the court before moving to return the next shot in badminton (See fig.3) Feedback from the athlete's coach is very important when improving technique so that the correct technique is learnt and can be worked on. Structuring practices to improve ability is difficult, as ability is an innate quality, although a sports psychologist in Australia found ways of improving hand-eye co-ordination by doing eye exercises. However this theory has not been proven but would benefit racket sports such as badminton. According to Fleishman there are nine psychomotor human abilities which are the innate qualities that an athlete may have. ...read more.

Skills that are easily divided are known as low organised skills, for example, a flick in gymnastics can be divided into different phases. Highly organised skills are harder to divide, such as passing the ball in hockey. To structure practices to improve these components of fitness the drills must be specific to the skill and correct in terms of the technique being used. Skill involves technique and ability, together these components make for a high level of skill. Usually, if the technique is correct, the athlete's performance is better. Technique requires innate ability but skills are learnt and involve pre-planned movements, which are directed towards sporting goals. However technique does not always have to be correct for an athlete to excel in their sport as some sports men and women have irregular techniques and still perform to a high standard. This means that skill is developed by having sporting ability and technique that suits the athlete. Well-structured practices enable ability to be improved therefore increasing the performance of skills. Only abilities specific to a certain sport, such as flexibility in gymnastics, are needed for technique but adequate health related and sport related fitness are required. The idea that ability cannot be improved is untrue as it can be enhanced through training and specific practices. For example, speed can be enhanced for a hockey player by working on muscular strength in the legs. Rebecca Goodwin 12B ...read more.