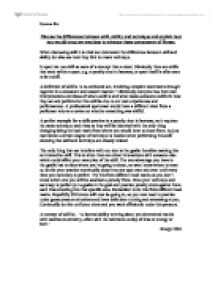 Discuss the differences between skill, ability and technique and explain how you would structure practices to enhance these components of fitness. When discussing skill it is vital we understand the differences between skill and ability but also see how they link to create technique. In sport we use skill as more of a concept than a word. Obviously there are skills that exist within a sport, e.g. a penalty shot in lacrosse, or sport itself is often seen to be a skill. A definition of skill is 'a co-ordinated act, involving complex movements brought together in a consistent and smooth manner.' Obviously everyone has their own interpretations and ideas of what a skill is and what makes someone skilful in how they act and perform but this will be due to our own experiences and performances. A professional sportsman would have a different view from a performer who is a novice on whether something was skilful. A perfect example for a skills practice is a penalty shot in lacrosse, as it requires the same technique each time as they will be identical with the only thing changing being the hash mark from where you would have to shoot from. ...read more.

Specific abilities that are required to play sport include: hand -eye co-ordination, flexibility and speed, without these abilities it would not be possible to learn many skills, e.g. tennis serve. Co-ordination is a gross motor ability and is needed in pretty much every sport especially in racket games. In tennis hand eye co-ordination is vital. The following practice will help your hand eye co-ordination, so you learn to hit the ball at the right time which means you also need to move the racket at the right time. To start with, practice just throwing the ball up to yourself and hitting the ball. When that is perfect and you can hit the ball with control get someone to bowl you an underarm ball at about waist height. Make sure you're sideways on with your racket ready to do a 'C' swing. When you have got hitting the ball with accuracy back to your partner perfected, practice placing the ball. This means you will need to hit the ball at different times, finishing with your racket in different places, so you will need to learn to co-ordinate your eye to hand movements for this. ...read more.

Start with the bar low and slowly higher it while you build up confidence. When you take off do so from about the middle of the mats so you don't hit the poles and also remember to take off from one foot. Continually using explosive force will tire you out quickly so take short breaks every now and then. This type of practice I believe from experience works best when taught as pure -part method, this way the performer will practice and perfect each part before moving on. "Great athletes train their minds as well as their bodies. There are various mental conditioning techniques many use when preparing for an event. Perhaps the best known technique is visualization, creating a mental image not only of the desired result (the gold medal, a new world record, a hole-in-one), but also of every move that will be taken en route to the ultimate goal." Unknown. So in order to be good at sport you can get away with just having a bit of skill and hardly any ability but to be a star you need great skill which comes from innate ability and a fantastic learnt technique. Word Count 1,199 words (including the title. ...read more.