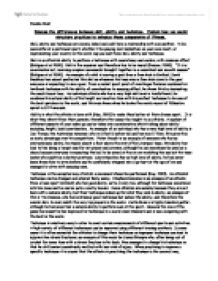 Discuss the differences between skill, ability and technique. Explain how you would structure practices to enhance these components of fitness.

Discuss the differences between skill, ability and technique. Explain how you would structure practices to enhance these components of fitness. Skill, ability and technique are closely linked and each have a relationship with one another. To be successful at a particular sport, whether it be playing 1on1 basketball on your local court, or representing your country in the world cup you must have skill, ability and technique. Skill is an athlete's ability to perform a technique with consistency and control, with minimum effort (Galligan et al 2000). Skill is the acquired and therefore has to be learnt (Roscoe, 2000). "It is a coordinated act, involving complex movements brought together in a consistent and smooth manner" (Galligan et al 2000). An example of a skill is scoring a goal from a free kick in football, David Beckham has almost perfected this skill as whenever his team wins a free kick close to the goal everyone is expecting to see a goal. From a racket sport point of view Roger Federer combines his textbook technique with his ability of coordination to amazing affect, he shows this by dominating the men's tennis tour. ...read more.

Some athletes are unlucky because they are not born with a natural ability, but their technique makes up for what they lack in ability, an example of this is Tim Henman, who had extremely good technique but lacked the ability, and therefore the overall skill, to ever match the very top players in the world. Justin Rose is a highly talented golfer, although he has never had a natural ability to perform well at the sport. However his love of the game has meant he has improved his technique to a world class standard and is now competing with the best in the world. Technique is relatively easy to alter to meet certain requirements of different sports and activities. A high variety of different techniques can be improved using different training methods. In some cases it is often essential for athletes to change their technique as improper technique can lead to injuries like stress fractures, an example of this would be Jason Gillespie who, after being out of cricket for some time with a stress fracture in his back, then managed to change his technique so that he still bowled consistently well but with less risk of injury. ...read more.

If you are a shorter person then your role would be different compared to those who are tall, you would most likely play as a wide midfielder or a full back as these positions don't require a good height to be a elite performer. There are two types of practices which affect how skill is improved, fixed and variable. A variable practice is when a skill is practiced in a variety of different contexts and therefore the athlete experiences the full range of situations, this would be good type of practice for a team performer, e.g. a batsman in cricket, because every ball bowled at the batsman is different, whether it is the line or length of the delivery or the speed of which it is bowled, so the batsman needs to be prepared for every eventuality. A fixed practice is when a skill is practice in one way repeatedly; it is usually used by athletes whose disciplines which rarely have different conditions. An example of this is a 100m sprinter; they follow the same stages during every race so they only need to practice them individual stages and the skill of the sprinter will improve. Therefore if you improve your technique and maintain and focus on the strengths of your abilities, this will lead to a better skill level. ...read more.