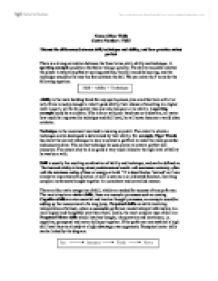 Discuss the differences between skill, technique and ability, and how practice makes perfect

Name: Oliver Wells Centre Number: 17655 Discuss the differences between skill, technique and ability, and how practice makes perfect There is a strong correlation between the three terms; skill, ability and technique. A sporting example could be a footballer taking a penalty. The ability would be whether the player is naturally gifted at scoring penalties, the skill would be scoring, and the technique would be the way the foot contacts the ball. We can relate the 3 terms by the following equation: Ability is the main building block for any sports person, (we are either born with it or not). If one is lucky enough to inherit good ability, their chance of excelling to a higher level in sport, will be far greater than one who has poor or no ability. A sporting example could be a cricketer. If he is born with poor hand-eye co-ordination, no matter how much he improves his technique and skill level, he will never become a world class cricketer. ...read more.

Perceptual motor skills can be linked by the diagram: Performers with experience have a greater advantage over novices with these skills simply because they have had more time to learn them. They have therefore improved their performance by factors such as positive and negative feedback, and trial and error. The phrase 'practice makes perfect' is the key to any sportsmen's success. One of the main types of practice is trial and error, (where you attempt a skill which you may find difficult, and repeat it until you master or perfect it). A prime example of trial and error is David Beckham. He has a very high ability in football, especially in free kicks, however he wouldn't have become a world-class free kick taker if it wasn't for the hours upon hours of practice on the training pitch he put in practising them. There are four main types of practice, which trial and error falls into: - Fixed Practice - Allowing skill to become 'over learned' by repetition of the activity, and eventually becomes second nature. ...read more.

Mechanical guidance takes the physical approach where coaches position the learner in the correct way and demonstrates the correct movement so the learner can remember the correct technique easier. An example would be a coach standing behind the player moving the learner's tennis racket into the correct position to play a forehand. In conclusion, although it is possible to see the similarities between skill, technique and ability, there are many differences between them, each fundamentally important in becoming a successful sports player. If one has an aspiration in playing a particular sport to a high standard, they will not succeed unless they have core ability in that area. If they happen to have ability, they will still not reach a high skill level unless this ability is applied to the sport and the right technique is learned. They will not establish a continuous high level of skill over time unless practice is repeated over and over. On other words, disregarding their differences, a performer will not be successful unless all four factors are applied to, but if they are the performer has the potential to be very successful. ...read more.