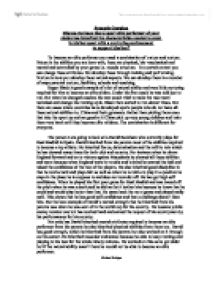 Discuss the issue that a sport elite performer of your choice has inherited the characteristics needed to excel in his/her sport with a nurturing environment to support him/her?

Synoptic Question Discuss the issue that a sport elite performer of your choice has inherited the characteristics needed to excel in his/her sport with a nurturing environment to support him/her? To become an elite performer you need a combination of nature and nurture. Nature is the abilities you are born with, these are physical, bio-mechanical and mental and controlled by your genes i.e. muscle structure. To a certain extent you can change these attributes. We develop these through training and performing. Nurture is how you develop these natural aspects. We can develop them in a number of ways parental nurture, facilities, schools and coaching. Roger Black is good example of a lot of natural ability and very little nurturing required for him to become an elite athlete. Under his first coach he was told just to run. But when he changed coaches his new coach tried to make the race more technical and change his running style. Black then started to run slower times. ...read more.

He has got high self confidence. When he played his first poor game for Real Madrid and was booed off the pitch when he was substituted he did not let it bother him because he knew that he could and would play better than that. He came back the next game and played really well. This shows that he has good self confidence and that a challenge doesn't faze him. But the best example of David's mental strength that he inherited from his parents was when he was sent of in the world cup for his country. He became public enemy number one but has worked hard and earned the respect of his countrymen by his performances for his country. Not only has David inherited mental attributes required to become an elite performer from his parents he also inherited physical abilities from them too. David has good strength, which he inherited from his parents but also worked on it through out his career. ...read more.

His schools always encouraged him too. They allowed him time off to attend training sessions and games in Manchester. Without this he would have been unable to play for Manchester Untied and then improve through the training. At Manchester United they taught him about diet and to eat the right things. This enabled him to stay healthy and control of his weight. He was also nurtured to deal with the media from a very young age at Manchester United because he was in the media from a very young age. He dealt with this because of the nurturing he received from Manchester United. Without all these nurturing factors David would not have been able to become an elite performer. I think that it was a mixture of natural talent, physical abilities and the good nurturing David received as a boy that allowed him to become an elite performer. Although I think it is mainly his natural abilities that have allowed him to get to the very top of the sport. These are his mental, attributes such as determination focus and his will to win. These along side good nurturing will always produce a good sports person. Michael Bridges ...read more.