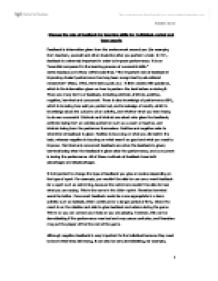 Discuss the role of feedback for learning skills for individual, racket and team sports

Discuss the role of feedback for learning skills for individual, racket and team sports Feedback is information given from the environment around you (for example, from teachers, yourself and other students) after you perform a task. In P.E., feedback is extremely important in order to improve performance. It is an "essential component in the learning process of successful skills." (www.teachpe.com) Mory (1992) said that, "The important role of feedback in improving student performance has long been recognised by educational researchers" (Mory, 1992, www.tedi.uq.edu.au). It links closely with guidance, which is the information given on how to perform the task before or during it. There are many forms of feedback, including extrinsic, intrinsic, positive, negative, terminal and concurrent. There is also knowledge of performance (KP), which is knowing how well you performed, and knowledge of results, which is knowledge about the outcome of an activity, and whether what you were trying to do was successful. Extrinsic and intrinsic are about who gives the feedback; extrinsic being from an outside performer such as a coach or teacher, and intrinsic being from the performer themselves. ...read more.

However, negative feedback could be very useful for beginners as it makes dramatic improvement to performance quickly, because they know what they need to work on. Negative feedback is particularly effective for an intermediate who has experience in the sport, but just needs to get better at particular techniques. There are certain things negative feedback must include for it to be effective, "negative feedback must include information on the action(s) required by the athlete to achieve the correct movement" (brianmac.co.uk 2008). Positive feedback is essential for beginners because they need to know how well they have done in performing a skill. It also encourages them to continue as it's something they are good at. "Athletes need to know if a movement is correct as this provides the reference point for future execution of the movement. Positive feedback is essential in motivating athletes" (Brianmac.co.uk 2008). By using specific feedback, you can also tell the learner what they did well, as well as being motivating, for example, "well done, that was a really good shot because you hit the ball with your laces". ...read more.

Another reason it's good for individual sports is because the learner needs to learn how to give himself or herself feedback, as they play the sport individually and need to learn how to evaluate themselves. Intrinsic feedback would not be suitable for team games, for example, in football nearly every situation is different, therefore it wouldn't be as easy to alter your technique for each individual movement. Intrinsic feedback can also be used if you record yourself performing a sport, and then analyse how well you did by replaying it and finding your weaknesses. In conclusion, feedback is essential for a player to progress in their skill. "Feedback is absolutely vital. It's very difficult to evaluate your own role without feedback." (Sharpe 1986) All types of feedback have their weaknesses and strengths. Some types of feedback are designed more for beginners, such as positive and extrinsic, whereas others are more appropriate for intermediates such as negative feedback. Others, such as concurrent, are usual for team games such as football, whereas intrinsic would be more appropriate for racquet sports such as tennis. The right type of feedback needs to be used so that the learner can progress as far as they can in their sport, and the feedback you use depends on the learner's ability, age and self-esteem. ...read more.