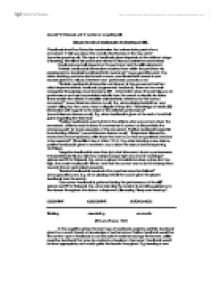 A level P.E. Edexcel, unit 2: section A: acquiring skill. Discuss the role of feedback in the learning of skills. "Feedback is an Error Detection mechanism that arrives during and after a movement. It tells you about the overall effectiveness of the response" (www.longroad.ac.uk). The type of feedback given depends on the athlete's stage of learning, this will be discussed and related to dance, badminton and netball. Feedback used will depend on the performer and the skill being learnt. "Intrinsic feedback is information received from within the performer via proprioceptors, developing a kinaesthetic awareness" (www.geocities.com). E.g. when dancing, you have performed a move, your kinaesthetic senses in your muscles, joints etc tell you whether it was performed correctly or not. "Extrinsic feedback is information not inherent in the movement itself but which improves intrinsic feedback (augmented feedback). There are two main categories: Knowledge of performance (KP) - information about the technique and performance and can be provided verbally from the coach or visually via video. These enable the athlete to establish a kinaesthetic reference for the correct movement" (www.brianmac.demon.co.uk). E.g. when playing badminton, your coach telling you the correct way to disguise a drop shot. "Knowledge of results (KR) - information with regards to the result of the athlete's performance" (www.brianmac.demon.co.uk). ...read more.

In the associative phase intrinsic feedback, as well as extrinsic feedback, would be suitable. The learner should listen to their kinaesthetic senses to judge whether it was correct or not, as well as the input from the coach. Negative and positive feedback should be given but the coach should be careful not to de-motivate the learner when giving negative feedback. Concurrent and terminal feedback are both necessary, now the learner has some knowledge of performance, terminal feedback can be given. E.g. when playing a drop shot in badminton the coach gives a selection of positive and negative feedback such as that drop shot was executed at the correct time because your opponent was at the back of the court, but you could have disguised it by making your opponent think you were going to do another over head clear when at the last moment you actually do a drop shot, this will give your opponent less time to react to the stimuli. This feedback should be given during and after the game. The learners should also listen to intrinsic feedback from their own muscles and joints. In the autonomous phase intrinsic feedback is necessary and should be present because the learner will have a good knowledge of performance. ...read more.

Schemas are an essential part of learning. When a new skill is being learned, the new skill is assimilated and the structure of the schema is accommodated when further information is added. E.g. when learning a new dance you learn sections at a time, you assimilate the new information and start to make a schema, you add to it by assimilating the information and accommodating the schema. The schema can be further accommodated when feedback is given to improve the skill. In summary there are different types of feedback, the type of feedback used to aid learning depends upon many things. For examples: The type of activity, whether it is a team sport like netball where you have to react to the stimuli or an individual sport like dancing where it is internally paced. The phase of learning, affects the type of feedback given. How the feedback is given, visually or verbally. The personality of the individual, someone who needs encouragement so positive feedback would be best. How well the learner accommodates the schema, whether they adapt quickly or slowly. In conclusion, feedback is essential in the learning of skills because it helps the learner understand the correct way of doing the skill successfully so they can attempt it. Without feedback the skill would continue to be performed incorrectly, therefore feedback is necessary, the better the feedback the better the skill can be performed. ...read more.