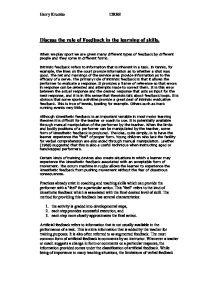 Discuss the role of Feedback in the learning of skills.

Discuss the role of Feedback in the learning of skills. When we play sport we are given many different types of feedback by different people and they come in different forms. Intrinsic feedback refers to information that is inherent in a task. In tennis, for example, the lines on the court provide information as to whether a shot was good. The net and markings of the service area provide information as to the efficacy of a serve. The primary role of intrinsic feedback is that it allows the performer to evaluate a response. It provides a frame of reference so that errors in response can be detected and attempts made to correct them. It is this error between the actual response and the desired response that acts as input for the next response, and it is in this sense that theorists talk about feedback loops. It is obvious that some sports activities provide a great deal of intrinsic evaluative feedback. This is true of tennis, bowling for example. Others such as track running events very little. Although kinesthetic feedback is an important variable in most motor learning theories it is difficult for the teacher or coach to use. It is potentially available through manual manipulation of the performer by the teacher. ...read more.

Terminal feedback refers to information that arises as a result of a completed response. It is often referred to as knowledge of results. success or failure of a jump. It would appear that terminal IF is of great importance for the learning of individual skills such as the tennis forehand, or rugby punt. Guidance is an important way of giving feedback. It can be given/received in three ways. � Visually � Verbally � Manually/mechanically When distance running is being taught all three types of guidance is needed for the performer to acquire the skill/technique correctly. If the body is in the incorrect position and the stride is wrong the coach would use a mechanical type of guidance to correct the body shape. Also in the situation the coach would use visual guidance to show the learner what would be the correct way of doing the action. If the coach thought that the runner was doing the technique correctly then they would use verbal guidance just to tell them a slight fault so then they can correct it quickly without having to restart the process again. I feel that the most destructive type of guidance is the mechanical guidance. This is because if it is used too much then the runner may feel demotivated and could loose interest by constantly being manoeuvred in how to play the stroke. ...read more.

To be told that one is disorganised will probably not be as useful as to be told "When you lost your place during the lecture and couldn't find the right notes, I found it distracting." * Balance positive and negative feedback. Positive feedback on its own allows no room for improvement and negative feedback on its own is discouraging. * Direct your feedback towards behaviour that can be controlled. It would not be helpful, for example, to comment on someone's lisp. * Ask for confirmation from a third party. For example, if you are giving feedback to a fellow student at the end of a seminar, then check out the accuracy of your feedback with them. * * Receiving feedback * Listen to the feedback without comment. You will hear more if you concentrate on listening rather than explaining or justifying yourself. * Ask for clarification at the end. You need to be sure that you understand exactly what your fellow student is saying about you and what evidence the comments are based on. * Devise action plans. Specify ways in which you want to change, new ideas you want to try, etc. * If there is anything your fellow students can do or not do to help you achieve your action plans, tell them. * Keep a written record. This can be used for later reflection, action planning and appraisal interviews. * Thank the person who is giving you feedback. Henry Kruczko 12RBE ...read more.