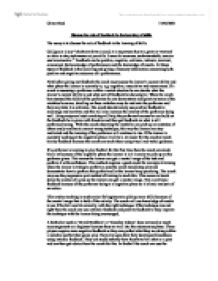 Discuss the role of feedback in the learning of skills The essay is to discuss the role of feedback in the learning of skills. Galligan et al say "whichever form is used, it is important that it is given or received as close to the performance as possible. It must be accurate, understandable, concise and constructive." Feedback can be positive, negative, extrinsic, intrinsic, terminal, concurrent, the knowledge of performance and the knowledge of results. All these types of feedback is the receiving and giving of sensory information concerning both positive and negative outcomes of a performance. First before giving out feedback the coach must assess the learner's current ability and what phase the learner is currently in, e.g. cognitive, associative and autonomous. If a coach is assessing a performer within a match situation he can decide what the learner's current ability is and what sort of feedback he should give. When the coach has assessed the ability of the performer he can demonstrate and point out some of the mistakes however, dwelling on these mistakes may de-motivate the performer and they may take it as criticism. The coach should mainly use positive feedback to encourage and motivate and this will also increase the interest of the performer doing well. ...read more.

A footballer such as 'David Beckham' or 'Zinedine Zidane' does not need as much encouragement as a beginner because they are well into the autonomous phase. These players require more negative feedback so they can perfect what they are doing within a match to perfect their game play. They rely upon their fully developed kinesthesis using intrinsic feedback. They can study instantly how they have hit a shot or a pass and can then get advice from the coach for this. In football the coach can use the knowledge of results feedback method to explain to the elite performer that their game play is slipping and the coach can tell them to change an aspect of their game. Performers like 'Beckham' or 'Zidane' are not as sensitive of criticism as a beginner would be. They use criticism to motivate themselves because of their own ability. An intermediate would need positive feedback and negative feedback because the positive feedback received would be used to reinforce learning and increases the chance of the same task being performed again e.g. a goal keeper interpreting a crossed ball. Negative feedback is essential so they know what they have been performing wrong and improve on that while not taking criticism in the wrong way. ...read more.

The coach would use constructive feedback to demonstrate and perform and improve the technique. Knowledge of performance feedback would be used to see how the performer has played from week to week and check if they are progressing or just putting in steady consecutive performances each week. If the performer is not improving then the coach should change the style of training to re-motivate the performer. I an individual sport like boxing the difference between a beginner and intermediate is a lot in the skill side of performance but may not be in physical strength. Intermediate performers will have learnt from feedback of their coach to increase on their skill. An intermediate would have developed small kinesthesis, whereas a beginner has not developed muscle memory yet. The coach would rely on the knowledge of performance to check whether the performer is improving. The beginner can be shown visually to perform a punch or block. If a performer is in bad form then positive feedback will be used until the morale of the performer is increased. When using command/reciprocal style teaching the learner can remain motivated and learn the proper technique. Experts use intrinsic feedback to further their skill. They can use their head mentally to try and predict what their opponent is going to do judging on knowledge of performance from past fights. The performer has good kinesthesis to determine this. ...read more.