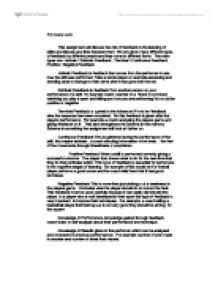 Discuss the role of feedback in the learning of skills and discuss any links between them.

P.E Course work This assignment will discuss the role of feedback in the learning of skills and discuss any links between them .We are given many different types of feedback by different people and they come in different forms. The main types are: Intrinsic / Extrinsic Feedback , Terminal / Continuous Feedback Positive / Negative Feedback. Intrinsic Feedback is feedback that comes from the performer to see how the skill was performed. Take a tennis player or example assessing and deciding what to change to their serve after it has gone into the net. Extrinsic Feedback is feedback from another person on your performance of a skill for example coach, teacher or a friend or someone watching you play a sport and telling you how you are performing his could be positive or negative. Terminal Feedback Is quoted in the Advanced P.e to be "feedback after the response has been completed. So this feedback is given after the players performance. For example a coach analysing the players game and giving feedback on it , This also strengthens the schema in the memory. Schema is something the assignment will look at further on. ...read more.

When analysing goal keeping a performer would use knowledge of results to get an idea of good and bad points in his game. They could look at how many goals conceded b***s dropped unforced errors made Over the season k they could keep this to compare it to previous seasons, This feedback is important to see how they are doing at the time. Guidance is an important way of giving feedback. It can be given/received in three ways: visually, verbally and manually (augmented) according to Sport and p..e text book "it is an essential feature of learning skills." When goal keeping is taught all three types of guidance is needed for the performer to acquire the skill technique correctly. If the body is in the incorrect position then the coach would use an augmented or verbal type of guidance to correct the body shape. Also in the situation the coach would use visual guidance to show the learner what would be the correct way of doing the action. If the coach thought that the player was doing any thing correctly then they would use verbal guidance just to tell them a slight fault so then they can correct is quickly without having to start the process again. ...read more.

- Outcome of the movement. Example how far the ball travelled. - Sensory consequences. Example how the shot felt, . Shema has been the subject of many sports scientists for example Schmidt and Thorndike according to shmidt and http://moon.ouhsc.edu/dthompso/mtrlrn/schmidt.htm a basketball player when shooting knows what it is expected to feel like and he/she compares the information supplied by their senses. Hence when confronted with a new situation the performer can make an attempt at the skill, based on the schema, and through practise will quickly improve. Then they can get to the standard of their other skills. The skilled performer relies on the variety of schema that they have encountered, in other words, their experience All In all Feedback contributes hugely to the learning of skills may it be in the form of intrinsic feedback positive or negative or looking at knowledge of performance . Without feedback it would almost be impossible to get to the levels of sporting greatness that some are .as they would simply not no what they are doing rite and doing worng and without things like schema players would not be able to build upon there knowledge and tweak things to perfection , and from these things they have tweeked they can be assesd and used as feedback to teach to others. ...read more.