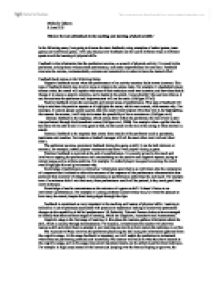 'Discuss the role of feedback in the teaching and learning of physical skills.'

'Discuss the role of feedback in the teaching and learning of physical skills.' In the following essay I am going to discuss the term feedback, using examples of racket games, team games and individual sports. I will also discuss how feedback can be used in different ways in different sports to aid the learning of physical skills. Feedback is the information that the performer receives, as a result of physical activity. It is used by the performer, to help them evaluate their performance, and make improvements for next time. Feedback must also be concise, understandable, accurate and constructive in order to have the desired effect Feedback back comes in the following forms: Negative feedback occurs when the performance of an activity contains faults or was incorrect. This type of feedback should also involve ways to improve the errors made. For example if a basketball player misses a shot, the coach will explain what area of their technique used was incorrect, and how they should change it to ensure a positive outcome, and a basket to be scored. It also shouldn't be used too often as it can de-motivate the performer and improvements will not be made. ...read more.

The Associative Phase involves the performer practicing the skill using the information gathered from the cognitive stage. At this stage feedback is important, as it will enable the performer to understand where they are performing correctly and incorrectly. The learner will build on what they have learned at the cognitive stage, and in this stage more small important details can be added to perfect their technique. For example in high jump instead of the learner just jumping over the bar and hoping to get over, the teacher will teach them elements to improve their technique, for example how the should arch their back and lift their trunk. The autonomous stage is the final stage of the learning process. Movement become almost automatic, and skills can be performed with little if any conscious thought, in response to an appropriate stimulus. For example in badminton a player will be able to serve, whilst deciding what their opponent will do next rather, rather than thinking about how to serve. However when applying feedback, the level and type needed varies at each stage. At the cognitive stage there needs to be a lot of positive feedback, more than what is received at the associative and autonomous stage. ...read more.

rather than if they were scored because of good technique and skill, or if they were just lucky and scored by chance. However all stages of learning like to receive knowledge of results. For example an Olympic 100m runner would still like to know if they ran in under 10 seconds. Feedback is very important in helping learning of a physical skill. For example negative and positive feedback, when given by a coach, helps to highlight the successful, and re enforce them, and unsuccessful areas of a skill, which then can be corrected. All types of feedback contributed to the learning and correcting areas of a skill, but it's important that the correct type of feedback is given. However the way in which feedback is administered is also important. If too little positive is given and too much negative it can de motivate the learner or performer and hinder their performance as a whole. The coach is a key person in delivering the extrinsic feedback to their learner, as he has to ensure that the feedback is correct and concise. (Galligan et al) Therefore without feedback a performer would not know what areas of their performance is correct or not, and also without feedback they also wouldn't be able to correct their mistakes. ...read more.