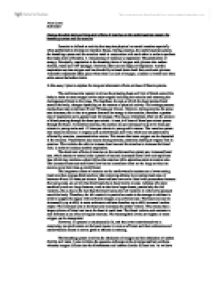 Discuss the short term and long-term effects of exercise on the cardiovascular system, the breathing system and the muscles.

Discuss the short term and long-term effects of exercise on the cardiovascular system, the breathing system and the muscles Exercise is defined as activity that requires physical or mental exertion especially when performed to develop or maintain fitness. During exercise, the cardiovascular system, the breathing system and the muscles work in conjunction with each other in order to perform their tasks more efficiently. A vital process of exercise is respiration. The production of energy. Principally, respiration is the breaking down of oxygen and glucose into carbon dioxide, water and ATP (energy). However, there are two types of respiration. Aerobic respiration requires oxygen and has the ability to break down both fatty acids and glucose. Anaerobic respiration takes place when there is a lack of oxygen, a lactate is formed and fatty acids cannot be broken down. In this essay I plan to explore the long and short-term effects on these different systems. The cardiovascular system involves the pulsating heart and flow of blood around the body in order to carry oxygen to the major organs including the muscles and returning the deoxygenated blood to the lungs. The heartbeat, the rate at which the heart pumps blood around the body, changes depending on the amount of physical activity. The average persons resting heart rate is between 60 and 70 beats per minute. ...read more.

This means that the inhalation and exhalation rates during exercise are increased in two ways. The tidal volume, namely the amount taken in each inspiration and expiration and also the rate of breathing, the number of breathes taken per minutes. The increase between these two figures can be as much as twenty times. So, an increase in tidal volume on breathing rate means that the amount of oxygen taken in will be directly increased. With more oxygen being inspired, the diffusion rate at the alveolar-capillary exchange surface will need to increase. The increase in diffusion rate in made possible by the increase in blood flow. During exercise, adrenaline is secreted into the blood steam, from the adrenal gland and brings about vasodilation. As well as oxygen and nutrients needing to be supplied to the muscles, waste product such as carbon dioxide need to be removed. Carbon dioxide can also be removed more efficiently from the blood. The short-term effects of exercise on the breathing system are, shortness of breath and rapid breathing. This occurs in order to replace the oxygen in the blood and remove the carbon dioxide, which has built up during exercise. The internal intercostal muscles and diaphragm are the reasons for this rapid breathing. The intercostal muscles contract more strongly than usual in order to expire carbon dioxide and other waste products more efficiently. ...read more.

This also means that athlete respire more fat than unfit people therefore have a lower fat content in their body and higher muscle bulk. Physical exercise that is directed mainly at working the muscles has a great effect on the strength of the muscle. The more the muscles are exercised the greater their strength. Exercising the muscles increases their size and consequently increases their strength. The more exercise that muscles do, the greater the blood supply. Regular exercise increases the blood vessels in the muscles and consequently increases the supple of energy and oxygen. Finally, regular exercise of the muscles improves movement and coordination between antagonistic muscles. It improves the speed in which muscles are able to relax and contract, as muscles that do not relax quickly enough can be torn. If muscles are under exercised and then are suddenly put under periods over exertion, they can become damaged, sprained or torn. Over exercise, rapid cooling and insufficient salt are all factors that can cause cramp. In conclusion exercise affects these three different systems in many different ways, however it is important to take into account each individuals personal health, fitness and lifestyle when considering the effects of exercise. For example a young healthy athlete who eat a balanced diet, doesn't smoke and trains regularly is going to have a more effective breathing cardiovascular, breathing and muscular system than a 60 year old obese diabetic who has smoked forty a day since he was 17. Alice Unwin 09/05/2007 ...read more.