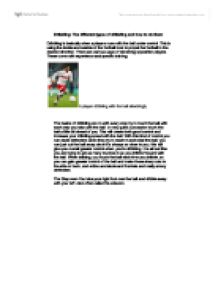 Dribbling: The differenttypes of dribbling and how to do them.

The body swerve is a dummy: pretending to go one way, but going the other. A dip of the shoulder and sudden change of direction is often all that's needed, but once you've wrong-footed your opponent take advantage of it with a burst of pace! The step over dummy attempts to send the defender the wrong way by pretending to play the ball to one side but stepping over the ball at the last moment A player using dribbling to beat an opposition player. These are the more technical parts of dribbling The Stop and Go-This is simply a change of pace. You jog slowly with the ball, usually when a defender is along side of you, and then burst past the defender. ...read more.

With the ball on your right foot, position yourself as if you are going to turn to the left, or to pass or cross the ball to the left. Then flick the ball between your legs, and make a quick turn to the right. Meanwhile the defender is left flat-footed and surprised. Starting with the left foot, the move is reversed; shape to turn or pass to the right, flick the ball between your legs, and turn to the left. In both cases, the turn should be a quick pivot. Remember that the Cruyff turn is a type of dummy, so don't overuse it during a soccer game. If the defender "reads" the move, he will be able to take the ball quite easily. 6. The 'Cruyff' Turn (above and below) Turn right foot inward with toe down and push the ball behind and away from you. ...read more.