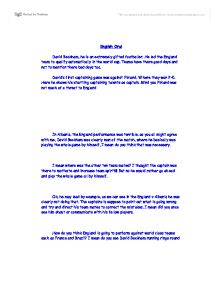 English Oral David Beckham, he is an extremely gifted footballer. He led the England team to qualify automatically in the world cup. Teams have there good days and not to mention there bad days too. David's first captaining game was against Finland, Where they won 2-0. Here he shows his startling captaining talents as captain. Mind you Finland was not much of a threat to England In Albania, the England performance was terrible, as you all might agree with me, David Beckham was clearly man of the match, where he basically was playing the whole game by himself, I mean do you think that was necessary. ...read more.

Ok, he may lead by example, as we can see in the England v Albania he was clearly not doing that. The captains is suppose to point out what is going wrong and try and direct his team mates to correct the mistakes. I mean did you once see him shout or communicate with his fellow players. How do you think England is going to perform against world class teams such as France and Brazil? ...read more.

to be captain for he has had experience in that sort of a situation or even Sheringham to be captain for he has also had much more experience in a captaining situation; Even the England goalkeeper has a more wide knowledge of a captaining position than David. To conclude my argument, David Beckham is only a trendy footballer who loves to be in the limelight which the media can't get enough of he Is also a role model for young children, but he is obviously not a role captain. (What a t****r!!!) ...read more.