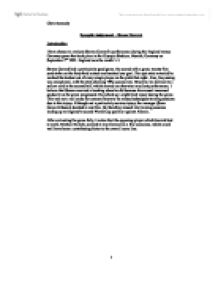 Evaluate Steven Gerrard's performance during the England versus Germany game that took place in the Olympic Stadium, Munich, Germany on September 2nd 2001.

Synoptic Assignment - Steven Gerrard Introduction I have chosen to evaluate Steven Gerrard's performance during the England versus Germany game that took place in the Olympic Stadium, Munich, Germany on September 2nd 2001. England won the match 5-1. Steven Gerrard had a particularly good game. He scored with a great, twenty-five yard strike on the forty third minute and assisted one goal. The opta stats revealed he worked the hardest out of every single player on the pitch that night. Also, his passing was exceptional, with the stats showing 79% success rate. However, he did receive a yellow card in the second half, which marred an otherwise excellent performance. I believe that Steven received a booking when he did because his arousal increased gradually as the game progressed. He picked up a slight back injury during the game. This was not a real cause for concern however he missed subsequent training sessions due to this injury. Although not a particularly serious injury, the manager (Sven Goran Eriksson) decided to rest him. He therefore missed vital training sessions leading up to England's second World Cup qualifier against Albania. After evaluating the game fully, I notice that the opposing player which Gerrard had to mark, Michael Ballack, seemed to lose Gerrard on a few occasions, which could well have been a contributing factor to the overall score line. ...read more.

Deep breathes common too, especially for a midfielder. Gerrard was able to do this when there was a break in play. Synoptic Assignment - Information Processing It is relevant for me to talk about information processing because the decisions Steven needs to make during a match could determine the overall result. Decisions such as passing, shooting, heading, dribbling, and tackling all need to be made quickly and efficiently throughout a game of football, due to the spontaneity of the sport. Decision making at professional level is much more crucial and could ultimately lead to success or failure. During the England versus Germany game, Gerrard was faced with many possible decisions. One in particular was crucial in preventing a possible goal for Germany. German striker, Carsten Janker, was running free on goal and Steven Gerrard was jockeying him. He had to make a quick decision in order to stop him continuing in to the penalty area. He made a slide tackle early rather than continuing to jockey him. Steven could have easily have fouled Janker however he took the risk and fortunately for him and the team, he caught the ball and not the man. Another crucial decision Steven was faced with was when he scored his goal. He ultimately decided to take one touch and shoot through a crowd of players from twenty-five yards out. ...read more.

With the rise of football as a money sport, football clubs have had more money at their disposal. This has led to the wages and transfer fees of players rising to astronomical heights, as bidders use their financial power to get what they want. A case in point: merely 7 years ago, the great Eric Cantona, the catalyst for Manchester United's domination of the Premier League for the 90s, was bought from Leeds for �1.2 million. This is a paltry sum when you contrast it with the fee that Real Madrid paid for David Beckham, Cantona's successor at United: a cool �26 million. Both great players in their own right, but in less than a decade, transfer fees have inflated to beyond imagination! The increasing commercialisation of football has been a worrying development. Oftentimes, football has been sold to the highest bidder among media companies, and the governing bodies have not served out their responsibilities effectively. Steven Gerrard is constantly in the media spotlight. It is the media who make him into the celebrity footballer he is today. As well as doing this, the media feel it is their right to criticise him when he is not doing so well, on and off the pitch. His freedom and privacy was lost as soon as he developed into this Footballing superstar. Steven was brought up in a rough council estate in Whiston, Liverpool. Without the commercialisation in football, Steven may not be in the fortunate situation he is now. Chris Kennedy 1 ...read more.