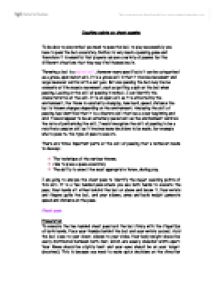 Evaluate the usefulness of the distinction between church and sect in explanations of the changing nature of religious participation in modern society.

Coaching points on chest passing To be able to play netball you need to pass the ball; to play successfully you have to pass the ball accurately. Netball is very much a passing game and therefore it is essential that players can use a variety of passes for the different situations that they may find themselves in. Throwing a ball is a motor skill. However more specifically it can be categorised as a gross, open motor skill. It is a gross skill in that it involves movement and large muscular control with a set goal. But also passing the ball may involve elements of fine muscle movement, such as putting a spin on the ball when passing. Looking at the skill of passing in netball, I can identify the characteristics of the skill. ...read more.

I am going to analyse the chest pass to identify the major coaching points of this skill. It is a two handed pass where you use both hands to execute the pass. Your hands sit either behind the ball or above and below it. Your wrists and fingers guide the ball, and your elbows, arms and body weight generate speed and distance on the pass. Chest pass Preparation To execute the two handed chest pass hold the ball firmly with the fingertips of both hands. Place your thumbs behind the ball and your wrists cocked. Hold the ball close to your chest, elbows to your sides. Your body weight should be easily distributed between both feet, which are usually shoulder width apart. Your Knees should be slightly bent and your eyes should be on your target (receiver). ...read more.