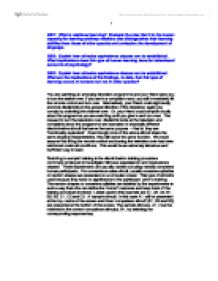 Explain how stimulus equivalence classes can be established. What implications does this type of human learning have for behavioural accounts of psychology?

2001: What is relational learning? Evaluate the view that it is the human capacity for learning arbitrary relations that distinguishes their learning abilities from those of other species and underpins the development of language. 2002: Explain how stimulus equivalence classes can be established. What implications does this type of human learning have for behavioural accounts of psychology? 2003: Explain how stimulus equivalence classes can be established. What are the implications of the findings, to date, that this type of learning occurs in humans but not in other species? You are watching an annoying television programme and your friend asks you to turn the station over, if you are in a compliant mood, you will immediately lift the remote control and turn over. Alternatively, your friend could sigh loudly and look disdainfully in the general direction of the television; again you comply by switching the channel over. Or, your friend could complain loudly about the programme you are watching until you give in and turn over. The request to turn the television over, disdainful looks at the television and complaints about the programme are examples of physically different discriminative stimuli that serve the same purpose - that is, they are 'functionally equivalent'. Even though none of the above stimuli share the same physical characteristics, they still serve the same function. We could assume that lifting the remote control and turning the television over has been reinforced under all conditions. ...read more.

This is the reverse of the previously trained relationship and is referred to as 'symmetry'. If the A stimuli are presented as both samples and comparisons, the participant will correctly match each A stimulus with itself. This phenomenon is referred to as 'reflexivity' and will also be observed with B and C stimuli. This may seem quite obvious but reflexivity does not normally occur with non-human participants. If the A stimuli appear as samples and the C stimuli as comparisons, verbally competent human participants will correctly match C stimuli to the appropriate to the appropriate A stimuli, this is referred to as 'transivity'. Combined 'symmetry and transivity' is observed when C stimuli are presented as samples and A stimuli as comparisons. When all these matching responses have been observed, a stimulus equivalence class is said to have been formed because each member of the class is treated equivalently. CLASS 1 CLASS 2 CLASS 3 A1 A2 A3 B1 B2 B3 C1 C2 C3 etc. etc. etc. A to B and B to C training is sufficient to produce stimulus equivalence classes in verbally competent human participants but evidence suggests that this is a uniquely human capacity and does not apply to other species. Dugdale and Lowe (1990) found that animals of other species, including chimpanzees, may succeed in reaching criterion performance on matching to sample tasks but they do not show any emerging relationships, they may not, for example, even match stimuli to themselves without explicit training. ...read more.

demonstrated the transfer of a response from one member of an equivalence class to a wide range of stimuli that were physically similar to another member of that equivalence class. A class was established which consisted of two nonsense syllables, A1 and B1, and one line length, C1. Subsequently, a response trained to A1 was found to also be controlled by not only B1 and C1, but also by lines quite different in length to C1. Similar mechanisms might be involved that control complex aspects of human behaviour. For example, if we are reinforced to speak to a same s*x friend in a certain way, then we might also adopt the same approach when speaking to any new same s*x friends we meet without a history of reinforcement for talking to that person in that way. Clearly, this is a very powerful method of extending ones behavioural repertoire. Similarly, this could contribute to less desirable outcomes by attaching fear or anxious behaviour to specific situations that were not previously feared. For example, a child could have a conditioned fear of water from a distressing incident in a swimming pool. It is possible that their fear related behaviour could come under control of all members of this equivalence class such as the beach, the bath or even the smell of chlorine. As we can see both operant responses and classically conditioned responses can be transferred across members of stimulus equivalence classes and those classes can in turn have many members, the phenomena of stimulus equivalence vastly increase the explanatory power of behavioural analysis. 3 1 ...read more.