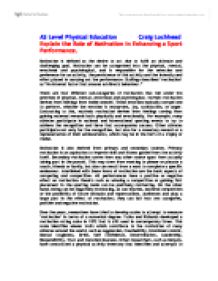 Explain the Role of Motivation in Enhancing a Sport Performance.

AS Level Physical Education Craig Lochhead Explain the Role of Motivation in Enhancing a Sport Performance. Motivation is defined as the desire to act due to fulfil an ultimate and challenging goal. Motivation can be categorized into the physical, mental, emotional and psychological, and is responsible for the selection and preference for an activity, the persistence of this activity and the intensity and effort placed in carrying out the performance. Stallings described 'motivation' as "An internal factor that arouses ad directs behaviour." There are four different sub-categories of motivation that fall under the premises of physical, mental, emotional and psychological. Intrinsic motivation derives from feelings from inside oneself. These emotions basically compel one to perform, whether the emotion is enjoyment, joy, satisfaction, or anger. Contrasting to this, extrinsic motivation derives from feelings coming from gaining external rewards both physically and emotionally. For example, many athletes participate in national and international sporting events to try to achieve the recognition and fame that accompanies success. Other athletes participate not only for the recognition, but also for a monetary reward or a representation of their achievements, which may be in the form of a trophy or medal. ...read more.

A major part of an athlete's maximum motivation levels rest on other points, too. The athlete's coach needs to manipulate the athlete's level of motivation in order to maximise the athlete's performance. The relationship between motivation and performance is very similar to the relationship between arousal of energy and performance. This is because the performer who is highly motivated is also very highly aroused. This is explained by two theories, Hull's Drive theory the Yerkes Dodson Law. Hull's drive theory states that: Performance = Habit x Drive Where habit refers to the strength of the learned response or skill, or whether the correct response has been practised until it has become a habit. Any response can have a strong or weak habit, depending on the level of practise that the athlete carries out at that skill. Drive refers to the level of arousal of the performer. Increased levels of arousal are said to bring about the dominant response, which is defined as the strongest number of possibilities of success. While learning, this dominant response is usually incorrect as the athlete is still prone to mistakes. When the skill has been fully learned, the dominant response is usually correct, as it is now a part of the habit of the athlete or performer. ...read more.

This is because arousal leads to a smaller span of attention, which is needed to grasp the information taught. Whereas, in later stages, arousal is needed more so that it can motivate the performer. Atkinson says that "whenever a person is faced with a task, the decision to reject the task is based on both personality and situational factors". The personality factor in this case is the motive to succeed or the motive to avoid failure. In any challenge the person would think and either the motive to succeed and/or the motive to avoid failure. The high achievers think more about the motive to succeed and the low achievers think more about the motive to avoid failure. The situational factors that changes the person's motivation is the incentive value of success and the incentive value of failure. The incentive value is how much the person thinks he/she will get out of the assignment given. All these factors represent the role of motivation in the enhancement of sporting performance. Motivation is a very important and critical aspect of a successful performance in any activity, but, essentially, is one of the major reasons for accomplishment in the modern sports realm. In conclusion, motivation plays a key role in enhancing sports, through mental, psychological, physical and emotional methods, and remains today a very well known and widely used method of attaining distant goals. ...read more.