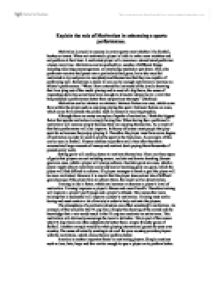 Explain the role of Motivation in enhancing a sports performance.

Explain the role of Motivation in enhancing a sports performance. Motivation is crucial to success in every sports event whether it be football, hockey or tennis. When not motivated a player is liable to make more mistakes and not perform at their best. A motivated player will overcome a demotivated performer almost every time. Motivation can be sparked by a number of different things including receiving encouragement, or even being insulted or put down. If an elite performer receives bad press over a particularly bad game, he or she may feel motivated to try and prove to everybody and themselves that they are capable of performing well. Sometimes a desire to win can be enough motivation to increase an athlete's performance. "When I have entered the last round of the javelin knowing that I am lying out of the medal placing and in need of a big throw, the sense of impending doom has sometimes been enough to stimulate adrenaline to a level that has produced a performance better then my previous attempts." ...read more.

This means that more training that is successful will improve a player's motivation. Training must not be boring and must contain a lot of variety in order to help motivate the players. The atmosphere of a particular situation can affect somebody's motivation. An example of this would be the FA cup final. Simply the cheering of the crowd and the knowledge that a win would result in the FA cup can motivate an entire team. This motivation will obviously encourage the team to do better. This is part of the reason why FA Cup finals are often substantially better then a simple friendly game of football. Another example would be when playing international games for your own country. The sense of actually wanting to do well for your country provides players with the motivation, which allows them to perform better. Emotion is another important factor in motivating players. Simple emotions such as love, hate, hope and fear can be enough to spur a player on to perform better. Arousal can also help or hinder players of sport. ...read more.

Without it a player will lack the effort and will to perform well. If a player is well motivated the coach will be able to concentrate on improving his or her technique rather then concentrating on improving the player's motivation. Therefore a player with higher motivation will have an increased performance due to an increased amount of time spent on their technique. Motives and needs of players are guided by the hope of success and the fear of failure. The hope of success plays a major role in motivating players. Every player has some sort of dream, only a few will achieve this dream. Players who succeed will see obstacles as a challenge and every time they fail they will put in more effort in order to improve and overcome these problems. This type of player would be intrinsically motivated. Other players while may be technically good enough to succeed, fail because of a lack of self-belief and willingness to spend the necessary time preparing physically and mentally. As Bill Besick (sports psychologist for Manchester United) says, "the strongest motivation must be because the player wants to win and in a team sport the motivation must be because the players want to win together. ...read more.