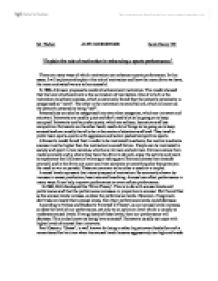 &quot;Explain the role of motivation in enhancing a sports performance.&quot;

Mr. Walker AS PE COURSEWORK Sarah Davey 12X "Explain the role of motivation in enhancing a sports performance." There are many ways of which motivation can enhance a sports performance. In this essay, I will explore and explain this role of motivation and how the more drive we have, the more motivated we are to be successful. In 1900, Atkinson proposed a model of achievement motivation. This model showed that the level of achievement is the summation of two factors. One of which is the motivation to achieve success, which is commonly found that the person's personality is categorised as "natch". The other is the motivation to avoid failure, which is known as the person's personality being "naff". Personalities can also be categorised into two other categories, which are introvert and extrovert. Introverts are usually quiet and don't need a lot to be going on to keep occupied. ...read more.

The Visualisation coach could be seen as the key specialist. He makes each player imagine and foresee them winning the game or competition. They also have a time for motivation, which they call "Lombardi Time", whom is a very famous American football coach who is also very well known for his motivational skills. This time could be spent as the team whole, or the players separating with their personalised programme. This is good to have separate motivational programmes as different players react in motivation in different ways. Paula Radcliff seems to be a good example of an introvert performer. The marathon does not include any aggression or jam packed action, yet it must take a lot of motivation to be able to run such a long distance without losing concentration or forgetting or miss calculating any facts that she may need to take in. If a jockey fell off a horse badly, it must take a lot of courage and motivation to get back on the horse and back to riding again without having to hold back with fear off falling again. ...read more.