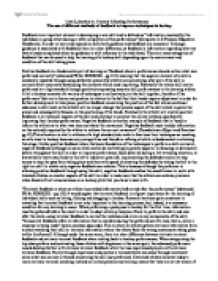 Unit 5, Section A: Factors Effecting Performance The use of different methods of feedback to improve techniques in hockey. Feedback is an important element in developing a new skill and is defined as "information received by the individual or group either during or after completion of the performance" (Complete A-Z Physical Education Handbook). In order to learn and expand on skills both guidance and feedback are necessary. Although guidance is associated with feedback there is a clear difference, as feedback is information regarding what we have already completed where as guidance is with reference to the task ahead. There are many categories of feedback that can be used to help the learning of a hockey skill depending upon the environment and condition of the skill taking place. Positive feedback is a fundamental part of learning as "feedback about a performance should outline what was performed correctly" (advanced PE for EDEXCEL -pg 112) meaning that the superior element of a skill is constantly repeated through using deliberate praise (the athlete now perceiving what part of the skill is correct) whist recurrently developing the elements which need improving. Eventually the whole skill can be performed at a high standard through positively expressing accurate skill performances to the learning athlete. A hit in hockey consists of a variety of techniques to collectively join the skill together, therefore if the performers' feet are in the correct position in relation to the ball but their hands require adjustment in order for further development to ...read more.

There are two stages of the augmented feedback which provide two diverse foundations of how to improve a certain skill. "Knowledge of performance (KP) is regarding information about the technique and performance" (www.teachpe.com). This can be provided verbally from the coach or visually via video using both positive and negative feedback. KP enables the athlete to establish a kinaesthetic reference for the correct movement, for example, by analyzing an aerial using video technology allows the athlete to experience his/her movements first hand at all different angles. Also due to rapid development in technology, at present a performer's movement can be positioned beside actions of another athlete performing the same skill (preferably an elite sportsman/woman) meaning that now comparison can take place between you and that superior athlete. Through using this technique judgment and evaluation are key factors which could help any hockey player develop more rapidly. "Knowledge of results (KR) is a further category of feedback which uses information which regards the result of the athlete's performance" (www.teachpe.com), for example how many penalties corners, shots on target or number of penetrations in the D did we execute throughout the 70 minute game. Using this information is significant in hockey especially when complete at national league level, where consistency in play (four times a week) and players (16 registered athletes) is constant. Gathering data from consecutive hockey games and identifying what minute their team appears to let the most goals in throughout the 70 minute block is an example of KR which may become vital in adapting team and individual play due to receiving this feedback. ...read more.

Less experienced performers however need this feedback to develop further before it is programmed into them by constant extrinsic and intrinsic information. Lower level participants should in addition receive supplementary concurrent feedback when learning a skill rather than terminal feedback as when a skill is being performed for the first time your brain will pick up instant knowledge of how to carry out the skill a further time, therefore eventually due to repeated actions the skill will become a natural process. If an athlete is not told how the skill was performed inaccurately, and how to correct the mistakes the athlete will then acquire bad habits and find the skill harder to correct later on in life, when the natural process has already occurred. This is because the body will feel the movement taking place under a kinaesthetic process where by the body is acting without conscious control. An example of this would exist in a hockey game when picking up the ball on the move. If an athlete had learnt to pick up a ball so that it bounced up off the stick every time this particular skill was performed, then as the athlete progressed into higher levels this would cost him/her to loose the ball due to other players becoming more capable to take advantage of their weakness and step up to take the ball off them. This kinaethetic phase would be hard to correct once the skill is programmed into an athlete and therefore if it is not put correct may prevent participation at the top level. ...read more.