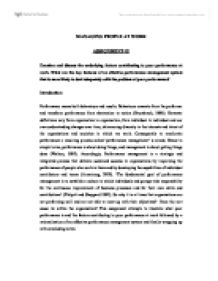 MANAGING PEOPLE AT WORK ASSIGNMENT-II Examine and discuss the underlying factors contributing to poor performance at work. What are the key features of an effective performance management system that is more likely to deal adequately with the problem of poor performance? Introduction: Performance means both behaviours and results. Behaviours emanate from the performer and transform performance from abstraction to action (Brumbrach, 1988). However definitions vary from organisation to organisation, from individual to individual and our own understanding changes over time, shimmering diversity in the interests and intent of the organisations and societies in which we work. Consequently to ameliorate performance a recurring process called 'performance management' is aimed. Hence in simple terms, performance is about doing things, and management is about getting things done (Walters, 1995). Accordingly, Performance management is a strategic and integrated process that delivers sustained success to organisations by improving the performance of people who work in them and by developing the capabilities of individual contributors and teams (Armstrong, 2000). 'The fundamental goal of performance management is to establish a culture in which individuals and groups take responsibility for the continuous improvement of business processes and for their own skills and contributions' (Philpott and Sheppard 1992). So why it is at times that organisations are not performing well and are not able to meet up with their objectives? Does the root cause lie within the organisation? This assignment attempts to illustrate what poor performance is and the factors contributing to poor performance at work followed by a rationalization of an effective performance management system and finally wrapping up with concluding notes. Poor Performance and Factors contributing to Poor Performance: The motivator-hygiene theory exhibits that man has two separate and autonomous need systems that do not interact. The first being the motivator range, transacts with man's need for psychological growth. However intrinsic job factors such as achievement, recognition, responsibility, opportunity for growth and enjoyment of the work itself fulfil the needs. ...read more.

19). In an effective organisation, assignments and projects are monitored or measured continually. Monitoring means constantly measuring performance and providing ongoing feedback to employees and work groups on their progress toward reaching their goals. It can be examined through the use of appropriate monitoring techniques which include feedbacks through focus groups, questionnaires, surveys and judging their performance. These techniques not only help in developing the skills on individuals but will gain in overall benefit for the organization. Kaplan and Norton (1992) developed a measurement technique what they called as the 'balanced scorecard' which uses a set of measures that gives managers a fast but a comprehensive view of their business. They emphasized that the balanced scorecard approach 'puts strategy and vision, not control, at the centre' (Armstrong, 2000). Armstrong also speaks of other measurement techniques such as Economic value added (EVA) being used by other organisations. One of the important measurement criteria for most of the researches is surveys that can be done through questionnaire or interviews and includes events that involve asking questions of respondents which collects data from large number of users. Focus group which is a form of group interviewing based on topics that are supplied by the researcher (Morgan, 1997, 12), draw focus upon respondent's attitudes, feelings, beliefs, experiences and reactions in a way which would not be possible with other methods permitting them to ask questions to each other, as well as to re-examine and reassess their own understandings of their unambiguous experiences. Another method of measurement used is Mystery shopping exercise. It is used for determining fragmentary efficient scrutiny of customer service levels within the organisation giving a chance to ensure that organisational standards and policies are adhered. It's a powerful tool where the management and employees know that they're going to be assessed by a mystery shopper, but they don't know the identity of the shopper or when they will be shopped. ...read more.

For performance pay plan to operate effectively, three conditions are necessary: The rewards offered need to be large enough to provide motivation to individuals groups, there should be a confirmed link between actual performance and subsequent reward, and the scheme/ plan should be perceived as equitable with the same rewards forthcoming for the same effort (Lawler, 1990, pp. 17-20; Milkovich &Wigdor, 1991, p. 153). These circumstances, however, have rarely been met. In spite of the growing popularity of performance pay in most public sectors, the track record of such schemes has been poor (Ingraham, 1993, pp. 348-356; OECD, 1993, p. 87). Other chief factors underlying the failure of performance pay schemes have been unsatisfactory funding from governments, an environment of political change, lack of organizational trust, and opposition from unions (Geis, 1988, chap. 8; OECD, 1993, chap. 6). Further trait critical to the success of performance pay schemes, Ingraham (1993) argues, is that they should be part of a fundamental reform process and not simply "grafted onto any existing management system" (p. 351). Rewarding individuals well in the lack of organizations performing well may, in the short-term, seem like delight people right, but it cannot last as too many competitors will take advantage of the situation and ultimately make it impossible for an organization to reward its employees well. Conclusion: Performance management is the single largest contributor to organisational performance. It takes innovative thinking and courageous thinking to quash a performance crisis that is generated by underperforming, poorly managed employees, but may be the most important action for someone. Diversity is alive and well in employee's personalities, skills, abilities, interests and levels of motivation and separation. Therefore, the traditional one-size-fits-all performance management thinking is obsolete in today's business environment. Perhaps there is loads of learning from this exercise however to highlight the crucial one is that - Performance management must clearly link to commercial objectives, but if people are to be genuinely motivated to perform better and contribute more fully to organisational performance, at some point in the development of performance management their needs and aspirations must be addressed. ...read more.