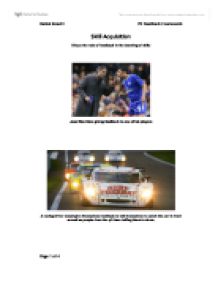 Skill Acquisition Discus the role of feedback in the learning of skills Jose Mourinho giving feedback to one of his players A racing driver would give themselves feedback to tell themselves to catch the car in front as well as people from the pit lane telling them to do so. Feedback is described as any kind of sensory information, not just that concerning errors. Feedback is very much associated with guidance. In order to learn and develop new skills guidance and feedback is necessary. Whilst guidance information is related to the task ahead, feedback is information on what we have done. Factors effecting feedback should be given as close to the type of performance as possible, it should be accurate, constructive and understandable. The most appropriate form of feedback depends on the learners and the type of activity that is being learnt weather it is an individual activity, team activity or racket activity. There are 8 different forms of feedback, feedback can be: * Positive * Negative * Extrinsic/augmented * Intrinsic * Terminal * Concurrent * Knowledge of performance (KP) * Knowledge of results (KR) Positive Positive feedback is used when a performer has performed something that is correct and innovative, this is essential for learning, ...read more.

For example, intrinsic feedback during a racket performance can involve a performer telling themselves that the opponents have got a better score than them and they should work harder to catch up with them. Extrinsic feedback includes knowledge of performance and knowledge of results, this is all from the coaches, peers and teachers. They use the results to give feedback as well as video tapes etc. Terminal This is feedback that s given to the performer before or after a performance as opposed to during the performance, for example a prep talk, half time talk and a talk after the football match is an example of this type of feedback opposed to concurrent feedback which is feedback during the performance from the sideline. Concurrent This is given during the performance, this can be extrinsic, a coach or manager shouting from the sideline, or intrinsic, a performer evaluating their performance during a game. For example a 100meter sprinter will evaluate their performance in relation to who they are racing against, if they are behind they will tell themselves to speed up to catch the person in front. Knowledge of performance (KP) ...read more.

Goals A teacher or a coach can use feedback to set goals for the performer. These goals have to be "SMART" S - Specific, easily understood and concise. M - Measurable progress that can be seen and recorded. A - Attainable, the goal has got to be such that the performer can reach it. T- Time-bonded, the goals should be set within a specific time framework. Conclusion Without feedback performers wouldn't know what is good and what is not. Without feedback people would not improve their performance and the benchmark for performance would be very low. Negative feedback can be used to motivate performers to make them more determined to get something perfect, but too much of this can also have the opposite effect on people and demotivate them to make them feel that they are no good. Positive feedback can make a person cocky about their performance and make them feel as though they are better than they really are, when a performer that has received too much positive feedback receives knowledge of results feedback, this can make them demotivated very quickly. A coach can be the best coach practically in the world, but if he does not give his pupil the correct form of feedback, it can be fateful to the performers career. ...read more.