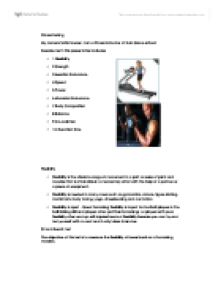 Fitness Testing My name is Sahin Ivecen, I am a fitness instructor at Turin Grove school Exercise test's this presentation includes � 1.Flexibility � 2.Strength � 3.Aerobic Endurance � 4.Speed � 5.Power � 6.Muscular Endurance � 7.Body Composition � 8.Balance � 9.Co-ordintion � 10. Reaction time Flexibility � Flexibility is the absolute range of movement in a joint or series of joints and muscles that is attainable in a momentary effort with the help of a partner or a piece of equipment. � Flexibility is needed in many areas such as gymnastics, dance, figure skating, martial arts, body toning, yoga, cheerleading and contortion. � Flexibility in sport - Good hamstring flexibility is import for football players in the ball kicking skill and players often pull their hamstrings or players with poor flexibility often end up with injuriesHere's a Flexibility Exercise you can try and test yourself with no cost and it only takes 5 minutes. Sit and Reach test The objective of this test is to measure the flexibility of lower back and hamstring muscles. Equipment: Equipment required to perform the test. Firstly you need to buy a tape for marking the ground, which will cost around �2, then a marker pen to mark the point where the subjects reaches, which will cost around �1 and finally you will need a ruler which should cost no more than a �1. so as you see it is a cheap and quick test to perform and saves you lots of money. You can also buy a sit and reach box, which is expensive, costing around �80-�110. Beginning your Exercise: Sit on floor with legs straight ahead, place back and head against wall and soles against box do this bear foot. Put hands on each other and reach forward while keeping head and back against the wall. The distance from fingertips to box edge becomes your starting point. ...read more.

Power Power - the ability to exert maximum muscular contraction instantly in an explosive burst of movements. The two components of power are strength and speed. For example An 80 kg athlete can run up a set of stairs, vertical height 3 metres, in 1.5 seconds Sports like javelin, shot put and high jumps, all need power, the more power a person can build up and release the better he would be, for instance, If I were to be javelin thrower, I would need a lot of power to throw the javelin far, the further I throw, the more chance I have of winning. A shot put has 3 sets, light, medium and heavy, the heavy shot put needs to be throw far with lots of power, the further it goes the better the chance of winning. Power in 400metre swim - Power is crucial, because the arms need it to get the body moving forward, the legs apply balance so they don't need any power. The arms carry the body in water, the more power the more burst of energy you will have. 40 meter sprint This test measures your ability to accelerate to full speed quickly, as well as reaction time: 1. Set out two markers 40 yards apart. 2. On a signal of marks - set - go sprint from one cone to the other as quickly as possible. 3. Have a training partner record your time with a stop watch. 4. Perform 2 trials and take the average time to the nearest 0.1 seconds. Equipment needed is a stop watch and one member to record the time, the stop watches can be found at any supermarket or shop and shouldn't cost any more than �2. The area needed to perform the task can be found at any open field or park. To undertake this test you will require: 400 metre track - with a 40 metre marked section on the straight, Starting Blocks, Stop watch and A assistant. ...read more.

Although I don't really have much knowledge on developing the hand and eye coordination skill, I think practicing this test and others could up your skill levels on coordinating your eyes with your hand and legs. Reaction time Reaction time is the elapsed time between the presentation of a sensory stimulus and the time it takes for the subject to respond. RT is often used in experimental psychology to measure the duration of mental operations, known as mental chronometry. The behavioral response is often a button press but can also be an eye movement, a vocal response, or some other observable behavior. Catch the ruler Equipment required: 30cm ruler, it is very cheap to buy and this test can be performed in any place. How to perform the test: One person holds the ruler near the 30cm mark and lets it hang vertically, the other person places their thumb and index finger either side of the 0cm mark ready to catch it when it falls - their fingers shouldn't touch the ruler. Without warning the person holding the ruler lets go and the subject tries to catch the ruler as soon as possible. The level (in cm) just above the subject's first finger where the ruler was caught is recorded. The same person is tested 5 times and then calculate the mean average of their results (add all five numbers together and then divide by five). Before starting the test I really tried to get my mind focusing on the fact that I have to catch a ruler, then I had my 5 goes, the first one was good, I caught it at 170, my second go I was determined to get better, I got managed to catch it at 156, third go I caught it at 180, fourth go I caught it at 167 and my final go I caught it at 123. then I added them and divided them by 5, my total average came to 159, which I believe is really good, although if I could keep my focus up I believe I could do better. ...read more.