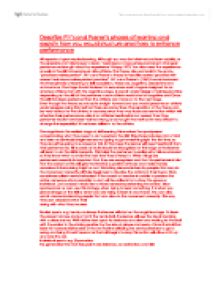 Describe Fitt's and Posner's phases of learning and explain how you would structure practices to enhance performance All aspects of sport require learning. Although you may be talented and learn quickly, or the opposite and take longer to learn. 'Learning is a more or less permanent change in performance brought about by experience' Knapp 1973. You also need the experience as well as the skill to become an elite athlete. The theory also contradicts the quote "practices makes perfect", Fitt's and Posner's theory is more like correct practice with correct technique makes perfect practice". Fitt's and Posner's (1967) have introduced the three phases of learning to skill acquisition, these are, cognitive, associative and autonomous. The stage should be learnt in sequence each stage is designed for an amateur athlete start with the cognitive stage. A coach would design a training practice depending on the skill of the performer a raw athlete would start at cognitive and Once the skill has been perfected then the athlete can move on to the next stage. Even though the theory sounds quite straight forward and you would presume an athlete would progress using this method there are some flaws. ...read more.

You can also watch demonstrations by people that can also do the movement correctly. This way they can associate what their doing with what they've seen. Racket sports- e.g. tennis, as always the leaner will start on the cognitive stage. To learn the correct stance and just to hit the tennis ball, the leaner will see the visual standing with a clear stance. With his/her feet apart for balance and alert and waiting for the ball with the racket in the starting position by the side of player and ready. Once the ball has been hit towards his/her side of the net he/she will bring her arm backwards to get a swing and bring it back forward as the ball begins to drop this action will allow a hit up and over the net. Individual sports- e.g. Gymnastics For gymnastics the main key points are balance, co-ordination, and skill. Learners watching someone performing gymnastics will notice the accuracy and timing that the performer uses. An example would be, walking along a beam. The learner see an image of someone walking across the beam with no difficulties, with his/her with equally balanced, with a clear straight position with his/her head up, concentrating on were the performer is going. ...read more.

No difficult skills should be taught such as drop shot or spins b***s, maybe introduce volleys, and the smash to their game. Individual sport- Gymnastics The gymnast at this stage will also be working on the quality of performance and needs help doing this, again, from feedback. Once the feedback is given the learner may notice things that were being done wrong that he/she had not noticed before. The autonomous stage, is the final phase of the skill learning process. Movements are made without mental planning, almost automatic and this is only obtained after much practise and quality repetition Mistakes may still be made but at this stage the performer will be able to recognise his own mistake and say what was done wrong, why he/she did it wrong and how he/she can do it right. The movements are performed fluently with no conscious thought about them being wrong. Movements appear automatic and seem to come effortlessly. "An expert can represent problems in terms of their abstracts. This is easier method store and to represent problems" (Anderson. J. R, 1995). If practise is not continued whilst at this stage the performer may return to the associative stage. Not all performers reach this stage in all skills. ...read more.